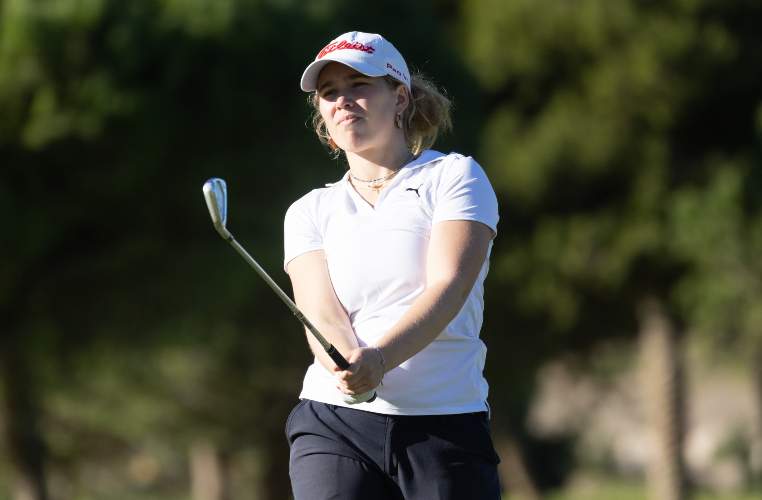 Denmark’s Amalie Leth-Nissen fired a bogey-free opening round of 64 (-7) to lead by two shots at the end of day one of the Final Qualifier at LET Q-School.

The 18-year-old was part of the triumphant Team Europe at the 2021 PING Junior Solheim Cup and was exempt to the final stage thanks to being in the top 25 on the World Amateur Golf Rankings.

Leth-Nissen got off to a good start on the North Course rolling in a birdie on 11 before making three consecutively on holes 14 through 16.

The teenager rolled in three further birdies on her back nine, which was the front nine, to put herself at the top of the leaderboard on seven-under-par at La Manga Club.

“It was lovely, I was a bit nervous in the beginning but from there it was really nice and there was nice weather too. I was very happy,” she said.

“I came in here and I was just focusing on hitting one shot at a time and that was my focus the whole round. I putted really well. It was one of those days where everything dropped.

“The South Course is a bit longer, so we might have a little bit more space but there will be longer shots into the green. I will keep playing my game and hopefully, it’s good.”

Leth-Nissen has been preparing to play at LET Q-School for the latter part of the year, after deciding it would be a goal to play and see how it goes.

She explained: “I have been playing a lot of tournaments, doing pretty good the first half of the year but then struggled with the swing. The last six months I have just been working on my swing and preparing for this. I feel pretty fit and ready for what’s coming.

“I thought about Q-School last year, but then I am still in high school, so it made sense to stay there. This year from the beginning of the year I knew I wanted to play this and see how it goes. You never know, if I do bad then you can still play amateur and have lots of fun with tournaments like Augusta.”

Two players sit in second place two shots behind the leader with Norway’s Dorthea Forbrigd and Germany’s Sophie Hausmann each on five-under-par.

It was a round of 68 (-5) for Forbrigd, who teed it up on the South Course on day one, as she made two bogeys and seven birdies including four in-a-row between holes five and eight.

“I hit the ball really solid today,” said the Norwegian. “I played the Pre-Qualifier, so I’ve played the course a lot, but I’ve been hitting it solid all week and I made some putts, so it was really good. I hit some good shots, I had two four-foot birdies and one long one as well which was nice, by then I was in full flow.

“It’s a lot less stressful with the weather this week, the wind definitely separates the field too. If you’re an experienced player, it’s a good opportunity to show that you can handle it. With conditions being as they are now there are more opportunities for everyone, so you have to make putts and stay solid.

“I’m just keeping the same strategy on both courses – hitting the fairway hit it somewhere close on the green and hit putts past the hole – I’ve been hitting a lot of putts short this week, so you’ve got to be aggressive with them.”

While Hausmann played in the same group alongside Leth-Nissen dropping just one shot on her way to a round of 66 (-5).

The German explained: “It was pretty good and a fun round. I had some solid ball striking and saw some putts going in which always helps. It wasn’t overly windy out there, so if you played your game, you could leave yourself some opportunities.

“Down the stretch, there were a couple of holes where I had to think and stick to my game plan and keep fighting and it worked out. At the end of the day, it’s about playing your game. It’s five rounds out here and you can’t force many things because it will turn around quickly.”

Hausmann has spent the majority of the year in the United States playing on the Epson Tour but did kickstart her 2022 season on the LET with a fourth-place finish at the Magical Kenya Ladies Open.

Having played at last year’s Q-School, the 25-year-old is using that experience and knowledge of the courses to help her this week.

“As I played last year, I have seen the golf courses a few times now,” she added. “I got here late on Tuesday; I had played golf the last two weeks.

“It’s a good thing I do know the courses, so I don’t over do it in practice rounds and I could rely on my memories. It’s a whole different weather this year and the practice rounds were pretty windy, so today you had to play what you had in front of you.

“I played pretty solidly and had nothing crazy going on, I will work on a few more things later. The scores look low out there too, we will see what the wind is doing. Tomorrow will be a new day.”

One shot further back are Australia’s Gabriela Ruffels and England’s Lauren Horsford as they sit in a tie for fourth place on four-under-par.