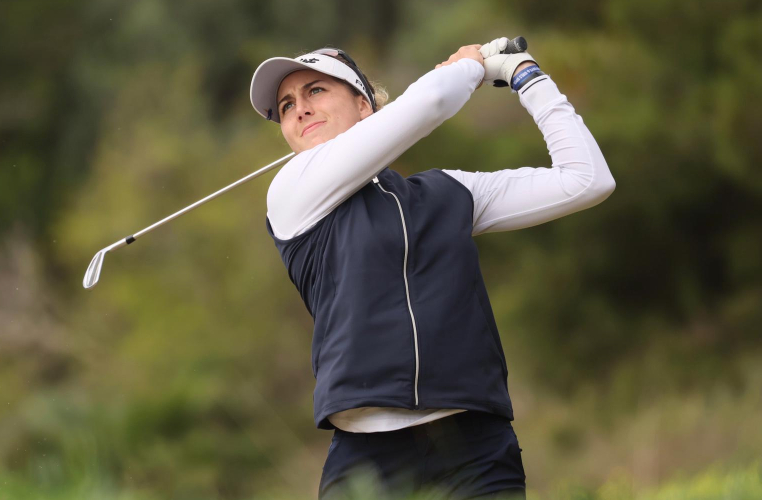 Amateur Nastasia Nadaud continued her excellent form at La Manga Club to hold a one-shot lead at the end of the third day of the Final Qualifier at LET Q-School.

The French player, who led after round two, produced a round of 66 (-5) on the North Course on day three to sit at the top of the leaderboard on 14-under-par.

Nadaud began her round well with two birdies in her first two holes before dropping shots on holes five and seven to make the turn in level par.

However, the teenager’s putter got hot on the back nine as she rolled in five consecutive birdies on holes 12 through 16 for her round of five-under-par.

“At the beginning, I had birdies on the first and second which helped for confidence,” said Nadaud, who won the Goteborg Open on the LET Access Series (LETAS) in the summer. “My game was less good between holes seven and 11, I struggled a little bit and made two bogeys and some pars.

“The birdie on the par-five helped me get back again with how my game was at the beginning and the past two days. I was on the green in two, so it was two putts for the birdie. Then I made a super shot on the par-three so had a two metre putt for birdie and then it was the same on the next two holes.

“I nearly made a hole-in-one on 16, so that ended up being an easy birdie. I just kept trying to do the same thing, reaching my zones and I made two pars on the last two holes which was enough.

“I’m trying to think like I’m not leading at all because I experienced it in France in September and it was hard to handle, but I’ll just try to have the mindset that I’m not leading and come here and start like it’s the first day.

“I’m going to be a bit more careful with the wind as it’s picking up a bit more, but my strategy won’t change, and we’ll see how it goes tomorrow.”

One shot behind the leader is Germany’s Polly Mack, who also posted a round of 66 (-5) on the North Course.

“It was another solid round,” said the German. “I’m really not making any mistakes still or at least not big mistakes.

“I’m still trying to keep it steady; a couple of putts fell here and there which was good. I also had a really good group, they made putts, so we were pushing each other, and I wanted to make putts too. It was fun and I just enjoyed the day.”

In third place on the leaderboard is Thailand’s Trichat Cheenglab after she carded a round of 67 (-4) on the North Course to have a total of 10-under-par.

The Thai player dropped her only shot of the day on the second hole and rolled in three birdies in-a-row on hole four through six before adding two more on her back nine.

“My irons have been super perfect and better than last week, and the weather is good, but I have to work on my putting,” said Cheenglab, who played the Pre-Qualifier – Europe.

“I love this course; I’m used to it because I played last week. I just play and be confident in myself and keep doing what I’m planning before.”

Cheenglab has made a few appearances on the LET and LETAS over the past couple of seasons and has been inspired by 2021 Race to Costa del Sol champion Atthaya Thitikul.

She explained: “I had an opportunity to play in an LET tournament two years ago at the Scottish Open and I felt that I like Europe, so I headed here to come to Q-School.

“The LET Access Series is very nice, all of the players are so nice and it’s great that that Tour gives so many chances for to get into Final Qualifier and get onto the LET.

“Jeeno [Atthaya Thitikul] is our idol to be here. We had a couple of players join the LET a long time ago and since Jeeno came here, so many Thai girls want to be here. It’s a very good Tour for us to join.”

Germany’s Alexandra Försterling, who came through Pre-Qualifying last week, sits in outright fourth place on nine-under-par having shot a round of 67 (-4) on day three.

“It’s been tiring because I have been for a good while now, but the weather is nice, so I just try to enjoy it and take it one hole at a time, one shot at a time,” said the German.

“I think my putting is really good, I had a couple of nice birdie putts going in which helps and also the shots into the green sometimes stick really close.”

Austria’s Emma Spitz is in fifth place on the leaderboard after three days and signed for a round of 68 (-3) on the North Course.

“So far this week it’s been pretty good,” said the 22-year-old. “Yesterday I had some rough holes on the front nine but it was nice to finish with three birdies to have a good end of the day.

“I think I played really well today; I just didn’t make a lot of putts. I hit really nice putts, but they just didn’t go in, so I know that I’m hitting it well and they just bounce a little or I misread them. I’m really happy that it’s really solid and I hope I can have two more rounds like this.”

Switzerland’s Albane Valenzuela is in sixth place on seven-under-par with Danish amateur Amalie Leth-Nissen and Norway’s Celine Borge one shot further back in a tie for seventh place, while rounding out the top ten on five-under are Slovenia’s Ana Belac and England’s Annabel Dimmock.

There will be a cut at the conclusion of round four with the top 60 and ties progressing through to the final round of LET Q-School.