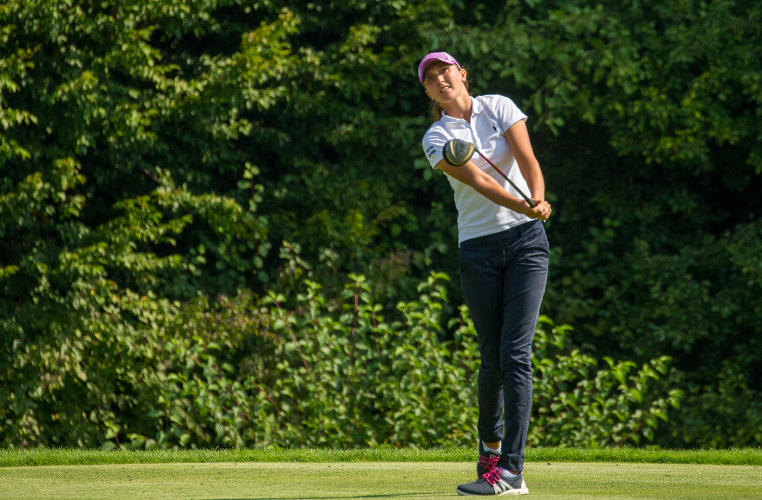 Slovenia’s Pia Babnik might be one of the youngest players in the field this week but she continued her rapid rise up the paid-ranks with a stunning round of 67 (-5), to hold a one-shot lead at the Amundi Czech Ladies Challenge at Prague City Golf Club.

The 16-year-old is familiar with making headlines, claiming her LET card at Q-School earlier this season having captured the Girls’ Amateur Championship and prestigious Helen Holm Trophy in 2019 as well making an appearance in the PING Junior Solheim Cup.

Making an impressive eight birdies and three bogeys on the tricky par-72 layout, which included a chip in, Babnik has been in form, entering the week off the back of top 20 finishes in the VP Bank Swiss Ladies Open and the Tipsport Czech Masters as well as seven straight victories in mixed field pro events in Slovenia, Germany and the Cech Republic during lockdown.

Speaking about her round, the LET Rookie said, “I really enjoyed the course, I love links golf and it is really well prepared and the greens are in great condition. The greens are really undulating but I somehow managed to make a lot of birdies out there.”

With three years still left at High School the Slovenian star has received a special privilege to compete this week, she continued, “Although I am only 16, I think it was the right time to move to the pro ranks, I am lucky that my school let me have time off to play in events like this, but it can be difficult to catch up and do the two things at the same time. I am going to relax now before a big day tomorrow.”

Trailing by a stroke in T2 place at four-under-par is Sweden’s Sarah Nilsson and Finland’s Tiia Koivisto, who regularly rooms with recent LETAS winner Sanna Nuutinen. The Finn finished with a flourish, making five birdies on the back nine to card a round of 68 after a front nine of 37 (+1) while Nilsson, who’s sister is playing on the LET this week, produced a similar display producing four birdies on the way in.

Making the most of her tournament invitation in T4 is local amateur and Prague City Golf Club member Sara Kouskova, who shot a round to remember with a 69 (-3).

The 21-year-old is currently studying at the University of Texas but used her local knowledge to her advantage.

“The key to scoring is hitting the right areas on the greens and it helps to play from the fairway so driving the ball is important. Having the LETAS here has made the setup more difficult but I do a lot of practice here and the resources that the golf club has to practice are incredible.”

Check out the draw for round two – HERE