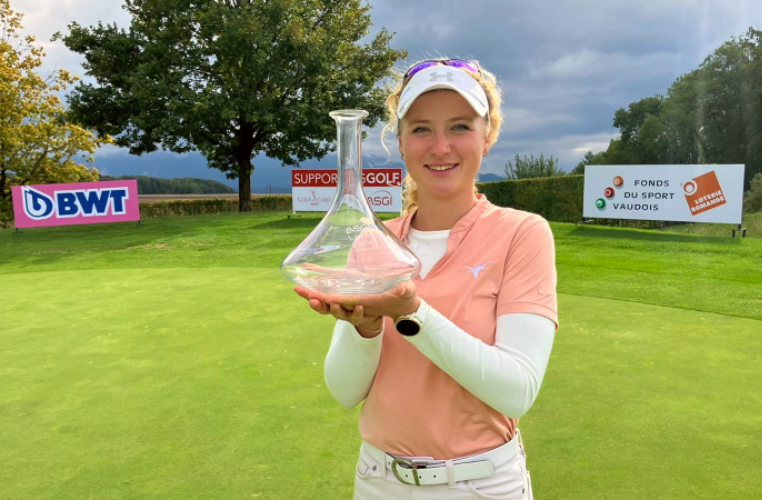 Czechia’s Sara Kouskova triumphed at the ASGI Lavaux Ladies Open securing her fourth win on the LET Access Series (LETAS) and a third one this season.

After rounds of 70 and 67 on the first two days at Golf de Lavaux, the 23-year-old champion started the third round with a two-shot lead and produced another and final score of five-under 67 to seal back-to-back victories after her triumph in Sweden a fortnight ago.

It was a slower start to round three for the Czech star who opened the day with two pars and dropped one shot on the par-four third.

“I didn’t think much about the score, I just played one shot at a time and tried to do my best in every shot. And I think I managed to do that well as it brought another five-under.”

But Kouskova got into her game with consecutive birdies on holes five and six, taking advantage of the par fives halfway through the front nine.

One more birdie on the ninth meant making the turn in 34 strokes and immediately dropping another birdie putt on the tenth put her in a lead by three.

“You need to be precise on this course and hit good wedges into the greens and obviously holing putts. That was really key for me because I feel like I made quite a bit of putts.”

The champion from Czechia in 2021 and Spain, Sweden, and Switzerland in 2022 then produced a strong performance on the back nine carding two further birdies on holes 15 and 16 to seal her victory by four strokes.

“I’m feeling just incredible and I’m very thankful for what we have on this tour. I’m excited for next week in England and finishing the season in Spain.”

German amateur Helen Briem showcased stunning performance as she kept improving her scores throughout the week and finished in outright second place at -8 total.

The PING Junior Solheim Cup star signed for rounds of 72, 69, and 67 with today’s perfect opener of three consecutive birdies and an eagle on holes three through six to put her in a share of the lead early on.

“I guess if it runs it runs. I hit some pretty good shots and holed some putts. The eagle was great, I had 190 meters into the pin and hit it to eight meter and made the putt.”

En route to her best finish in a professional tournament, the runner-up was not intimidated by a double bogey on the seventh hole which had her make the turn in 33 shots.

“There is always room for improvement, in the first round I had some bad luck with my driver, and I wasn’t able to recover myself well, but I would say it was a good tournament for me,” said the runner-up.

She continued: “I learned from my mistakes and got better with every round, and I feel like I could do even better if there was another round.”

The 17-year-old added two more birdies on holes 10 and 17 to earn low amateur in her third LETAS event before going back to school next week.

“It’s been great competing in different tournament fields, I’ve played in some of the best amateur events, and with the professional tournament you get a lot of experience on the tougher setups.”

Compatriot Chiara Noja finished one stroke back at -7 with Swiss amateur star Elena Mossmann joining her with a share of the third position.

Sweden’s Corinne Viden is another shot back in solo fifth spot while England’s Gemma Clews and Austria’s Katharina Muehlbauer take the sixth place at -5 and seventh spot at -4, respectively.

Tina Mazarino of Norway and Amy Walsh of Australia tied for eighth at three-under-par as five players round out the top-10 with a share of the tenth position.

With her triumph, Kouskova moved to the second spot on the LETAS Order of Merit with 2,132.18 points, while Noja remains in the lead with 2,217.98 points and her compatriot Patricia Isabel Schmidt is third with 1,756.64 points.

Momoka Kobori from New Zealand remains fourth (1,626.50), Dutch amateur Lauren Holmey fifth (1,512.80), and Sweden’s Anna Magnusson sixth (1,263.09) as they are all within the top six which at the end of the season will secure a full LET card for the upcoming year.

The LETAS season continues next week with the Rose Ladies Open from 23–25 September in England.