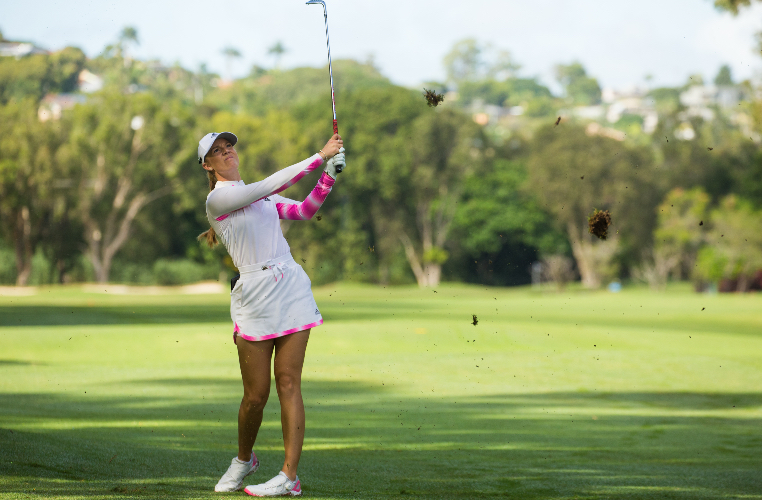 Australia’s Kristalle Blum fired a five-under 67 in the second round of the Golf Vlaanderen LETAS Trophy to lead by one stroke in Belgium.

The 24-year-old, who a carded three-under 69 on day one, started today’s round on the 10th hole and rolled in back-to-back birdies on holes 12 and 13.

The Australian swiftly followed the birdies with an eagle on the par-four 15th to make the turn in 32 (-4) at Millennium Golf.

“Going into today, I felt like I knew a low score was out there. I gave myself plenty of chances yesterday and missed a lot so I knew I could do the same today if I gave myself the opportunities,” commented Blum.

“I played really solidly on the front nine and the eagle was obviously really helpful, I hit a great gap wedge in there and to see it go in was a nice bonus.”

Blum added further back-to-back birdies on holes three and four and dropped the only shot of her round on the seventh.

“It was nice to go out and have another good round today, we had some bad weather this morning also and I just stuck with my game plan,” said the player who sits 17th in the LETAS Order of Merit.

“This afternoon will be nice to just chill out and relax, I’ve had a big couple of months so a quiet afternoon watching some TV will be perfect!”

One shot back is yesterday’s leader, France’s Yvie Chaucheprat who added a round of one-under 71 in round two.

And both players in the top two spots on the leaderboard are looking to clinch their maiden win on the LET Access Series.

In third place with a four-under-par total is another Frenchwoman, amateur Nastasia Nadaud who signed for a three-under 69 today.

While Sweden’s Sandra Kagstrom and two experienced players Anna Magnusson from Sweden and Chiara Noja from Germany all carded rounds of 71.

In a tie for eighth place and rounding out the top 10 on one-under are Norway’s Julie Boysen Hillestad and a trio of amateurs: Savannah De Bock from Belgium, Judith van der Voort from the Netherlands, and Isabella Holpfer from Austria.

A total of 63 players made the cut which fell at +10 after two rounds, and the final round will commence on Saturday at 8:10 CET.