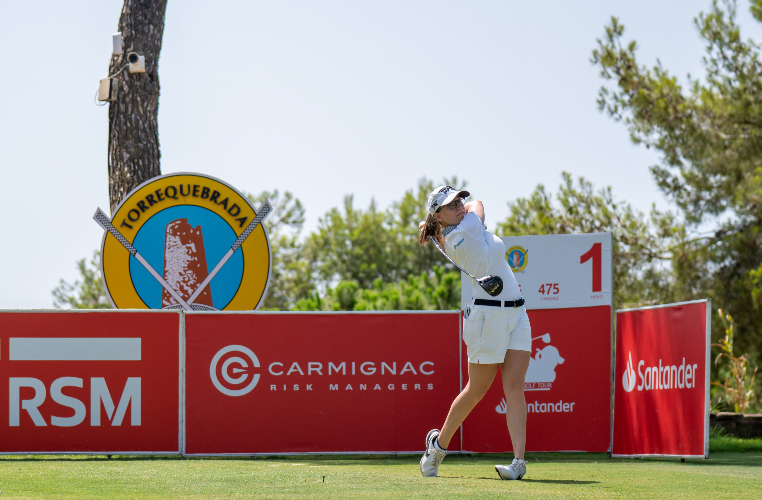 Virginia Elena Carta carded a round of even-par 72 on the second day of the Santander Golf Tour – Malaga and holds a two-stroke lead with one round of competition left.

The Italian star, who led overnight, had a great comeback on the back nine to regain her lead after a rocky start at Golf Torrequebrada.

Carta dropped four shots on holes four through ten but fought until the end, taking the four strokes back with birdies on holes 11 through 16.

“At the start, I had no idea what was going on, I kept chunking my chips. I was four-over through ten and then I decided to respond with a better mindset after a three-putt on the tenth.

“That probably woke me up, then I made a good shot on 11 and I told myself this was a good opportunity to start making some birdies,” she said.

The rookie on the Ladies European Tour continued: “I’m very pleased overall and with the fight more than anything. I could have made the five-footer on the last hole for birdie but it’s still a good momentum going into the final round.”

Norway’s Tina Mazarino sits in outright second place on two-under-par having fired two rounds of 71 to put herself in contention.

The Norwegian, who celebrated her 22nd birthday on Monday carded three birdies on the front nine to put her in a brief lead which she has been attacking in the last few weeks.

Mazarino then dropped four shots on holes 13 and 14 but pushed her score back under par with two final back-to-back birdies.

“After the triple bogey I was really disappointed, but I also knew I hit the ball pretty good and I needed to stay strong and try to come back to my own game,” continued the player who has her boyfriend and a professional ice-hockey player on the bag.

“It helps so much. We work great together as a team, and he helps me to stay calm. He also knows a lot about what to eat and drink on the course, so I take that with me.”

Spain’s Sara Navarro is in solo ninth position at +1 total while amateur duo Louise Reau of France and Sara Ericsson of Sweden share the tenth place a further stroke back.

The final round will begin on Saturday morning at 7:50 with the final group teeing off at 11:10 local time.