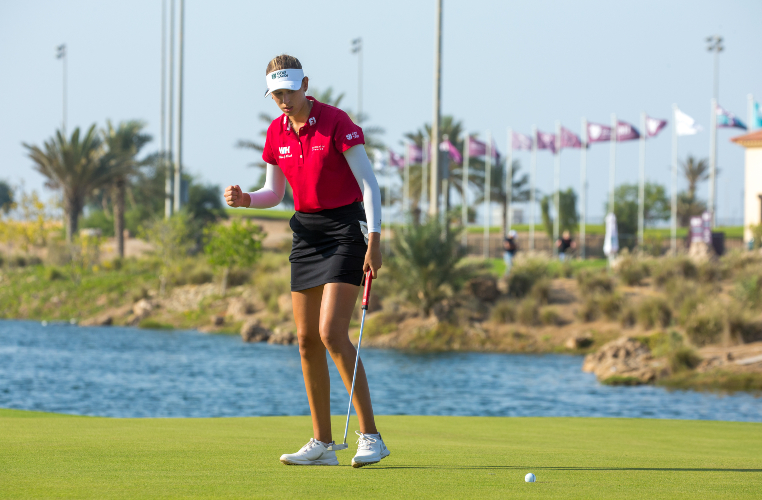 The 16-year-old talent first fired a sensational final round of 65 (-7) to challenge leader at the start of the day Charley Hull in a play-off.

The Dubai-based teenager, who finished second on the LETAS Order of Merit this year then made a birdie on the first playoff hole putting pressure on English star Hull, but she duly rolled in her birdie putt.

And the duo headed back down to 18th hole for the second time but this time it was Noja who rolled in her birdie putt to clinch her maiden LET title.

“I don’t think it’s sunk in quite yet! I think the stress and happiness will come later this evening,” said the teenager, who was victorious at the AMUNDI Czech Ladies Challenge in early June.

“It is hard work over a lot of years, and a lot of commitment and just trying not to back out of shots and commit to everything that I do and not be afraid to fail.”

Noja started the day brightly with back-to-back birdies before sinking an eagle on the fourth hole, and she finished her front nine with a bogey in-between two birdies to make the turn in 31 (-5).

Two further birdies on 11 and 12 put the German rising star in pole position before she finished her round with a birdie on 16 and bogey on 17.

“This course, when you can go into par-fives in two, it is a massive advantage,” she continued. “I tried to take advantage of that this week, and it paid off.

“I can’t even begin to fathom what I’ve just done. I’m just going to try and relax tonight. Maybe have a burger, I don’t know, treat myself! Sleep. I think it’ll be the best night of sleep I’m probably ever going to get and see how I feel tomorrow.”