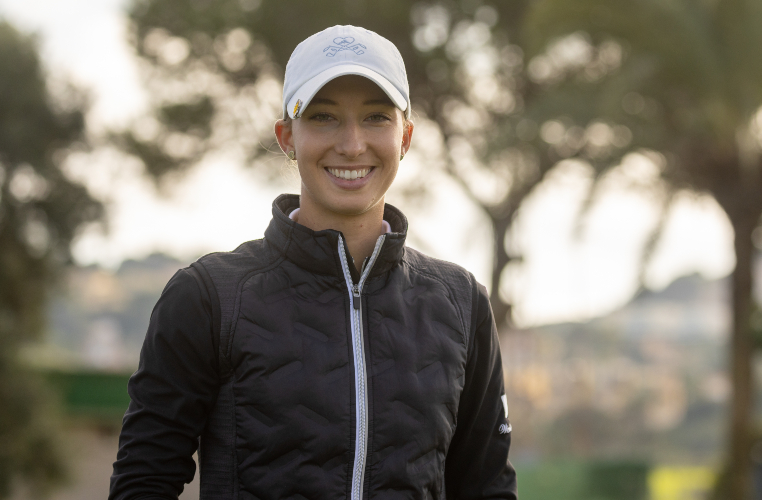 Alexandra Försterling fired the round of the day producing a 67 (-6) on day four to lead by two shots at La Manga Club.

On the fourth day of the Final Qualifier at LET Q-School, the German golfer rolled in birdies on four and six before making three consecutively on holes eight through ten.

The 23-year-old added another birdie on 13 before dropping a shot on 15 and finishing her day with a birdie on 18 to lead with a total of 15-under-par.

“The best part of my game was definitely the putting,” said Försterling. “Even the people in my group said I putted really well. It was like the hole was a magnet for my ball, it was fun. I had a good roll on it and a lot of putts went in.

“I’m just enjoying the weather a lot, compared to Germany it’s a treat being here and having a little bit of sun before going back. That’s probably what I’ve been enjoying the most and actually out on the course and seeing my ball flight. Before I came here, I didn’t see my ball flight at all, so it’s nice.

“Last week I was playing the South Course twice in the wind and I thought it was the harder one out of the two. I probably had a little bit more respect for the South, but today I became friends with it! I will try to do the same things as today and focus on one shot at a time and one hole at a time.”

Försterling played in two LET events in the summer, finishing T17 at the Big Green Egg Open and T4 at the VP Bank Swiss Ladies Open, and the German is hoping she can secure her card for the 2023 season.

She explained: “It was definitely my goal to come here and secure one of the cards. That was one of my main goals and we have one day left, so we’ll see.

“When I played those two tournaments during the summer, I just had so much fun. Everybody was so nice; the atmosphere was amazing and that’s one of the main reasons why I want to play on the LET. I want to secure a couple of wins and have a good career.”

In second place on 13-under-par is Germany’s Polly Mack after she carded a round of level par on the South Course.

“It was obviously a little difficult as my scorecard tells,” said Mack. “It was a little bit windier, and the pins were a little harder than the past couple of days.

“Since we didn’t play the last few days in the wind, it was a little more challenging today but I’m still looking forward to tomorrow. I was struggling a little bit in my long game; it wasn’t quite as good as yesterday or the past few days. I hope I will fix that a little bit now.

“Tomorrow, I want to keep it simple. Try to limit those mistakes to the minimum and keep a good mindset, stay positive and stay in the here and now. Don’t look forward or back and just have fun right now.”

French amateur Nastasia Nadaud, who led after round three, sits in third place on 12-under-par after day four at La Manga.

The LETAS winner explained: “Today was a bit more difficult, especially with the wind. My game was not at the top, I struggled at the beginning. I managed to make a couple of birdies, but then I fell short on 16th and was three-over on that hole. That’s golf! It’s all fine and we’ll head into tomorrow with the same mindset.

“I’m going to try to forget about what happened today and hopefully it’ll be less windy and warmer because it’s getting chilly. I’ll keep focused on what I have to do and stay calm, and we’ll see. It would mean everything to be on the LET! I’ve been preparing for this for two or three months and it would be a dream come true.”

Thailand’s Trichat Cheenglab is in fourth place on 11-under-par with three players in a tie for fifth place as Slovenia’s Ana Belac, Austria’s Emma Spitz and Switzerland’s Albane Valenzuela are all on seven-under-par.

The cut fell at +3 with exactly 60 players making it through to the final day of competition, which will see the field tee it up on the South Course.