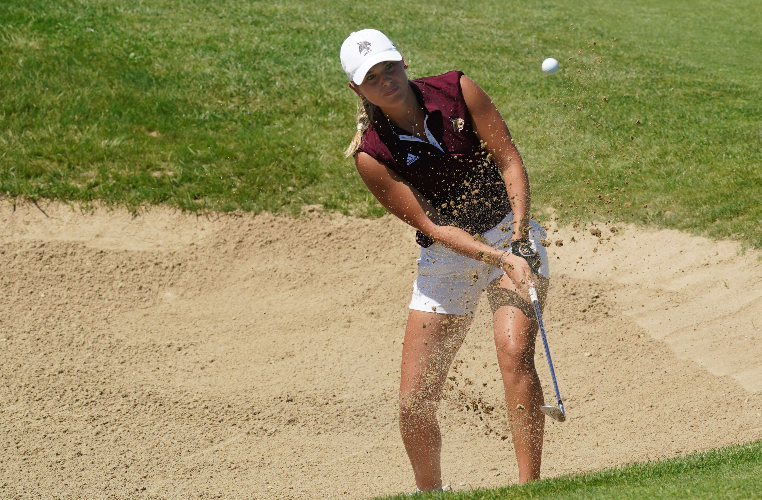 A couple of years ago Marine Griffaut thought about quitting golf, fast forward to 2021 and she secured a maiden LETAS victory on home soil at the Montauban Ladies Open.

It was the first time the French amateur had entered a tournament in two months, and she competed alongside 43 other French golfers.

But a win was never on her mind. The one goal for Griffaut, who is a freshman at Texas State University, was to make the cut.

She said: “I did not originally play to win the tournament, but I still felt that I would play well, and I could win a tournament this season. I could control my game and that was all I had. I could not control other players’ game. So, my expectations were not that high.”

Griffaut opened the tournament with a round of one-over-par (73) at the Golf De Montauban course and followed that up by firing a six-under 66 in the second round.

“That was the lowest tournament round of my life. I felt so content with my game and my attitude was great,” she said. “I told myself before the round that I would not hit a shot until I was one hundred percent ready to hit it. I would even step back, and I kept telling myself it was what I had to do if I wanted to go low.

“Once I saw myself at the top of the leaderboard, I told myself ‘Right, Marine, you got this. You can win, you are so close.’ I was so close to winning a few tournaments in the last year or so including in the States, but I could never make it, I collapsed. So, I knew this was my chance.”

Griffaut, who had her friend on the bag, entered the third round in the final group just two strokes off the lead and she shot two-under-par 70 on the last day and ended up securing the win in her first professional event.

“I was pretty nervous at the beginning of the last round,” she said. “On the first tee, I was just telling myself to hit the fairway. And I did, so then the pressure fell off me. But I could still feel the pressure, the adrenalin throughout the final round and I honestly think that was what got me going, it helped me play well.

“I asked my friend to caddy for me. He is a good golfer; he knows my game. I had to talk to him when I started to feel the nerves and it helped. I just tried to control my nerves, my breathing, and tried to calm my shaking hands.”

It wasn’t until she was on the final green that Griffaut realised what she had achieved, and she was grateful to have had family and friends in the audience.

She added: “I have not seen so many cameras around me, have not done so many interviews. All of it felt so good, especially here in France. I had my friends there and my aunt and cousins came out to watch and support me. I am so glad I could achieve this in front of them.”

The road to winning on LETAS was not easy for Griffaut, who started her studies at the Texas State University in January after two years of not even being sure about her golf career.

“I struggled with my game quite a lot,” she explained. “Two years ago, I was even thinking about quitting. I did not know what to do and whatever I tried; it did not work. That is why this win is so special to me.

“I had my close friend who came to Montauban to surprise me and watch me play and she knows what I went through with my golf. So, having her here, I had someone who could really understand what I felt after the last putt on the 18th.”

Just one week after the tournament finished, Griffaut celebrated her 20th birthday with her trophy by her side.

She added: “I have my trophy right beside me right now and it actually feels like the best birthday present. Everyone from home wanted to take pictures of me with the trophy, so I took it home and I celebrated here.”