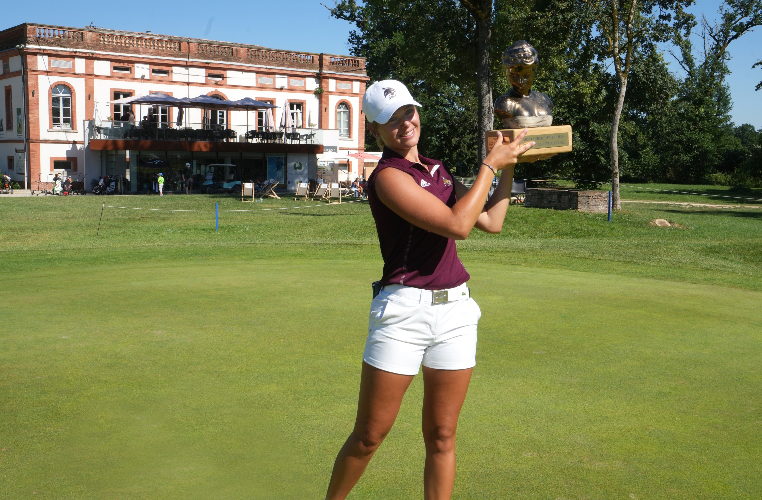 French amateur Marine Griffaut secured a maiden LETAS victory on home soil at the Montauban Ladies Open.  The Texas State University student shot a final round of two-under-par 70 at Golf du Montauban to give her a three-shot win over Czech amateur Tereza Melecka with a total score of seven-under-par.

Griffaut headed into today’s round, two strokes behind her fellow French amateur Yvie Chaucheprat but with three birdies on the front nine jumped to the top of the leaderboard and took control of the tournament. The 2021 Montauban Ladies Open champion closed out the tournament with a solid back nine and joins fellow French amateur Lucie Malchirand as an LET/LETAS winner this season.

“I can’t even describe my feelings. I have to enjoy this moment,” said the young amateur after her victorious moment. “This was my first professional tournament, and my original goal was just to make the cut. Then I shot six-under yesterday and was close to the win, so I told myself ‘You can do this Marine, this is your opportunity.’ I trusted myself.”

The leader after round two, French amateur Yvie Chaucheprat, finished tied third with the best professional Rosie Davies, on two-under-par. Yvie will take a lot of confidence from how she performed, with the highlight of the week, an opening round 68.

Rosie Davies also takes her performance positively: “It is a good sign of my progress and competing in the final group on a Sunday is something I have been working really hard towards. It is definitely nice to finish best professional. I am pleased that I felt calm and trusted the process.”

Czech amateur Tereza Melecka played some solid golf in the final round with a four-under-par 68 that secured her the second spot at four-under-par. Melecka performed flawlessly with four birdies and fourteen pars, to sign off the week with a bogey-free round. This is Melecka’s third time as a runner-up at a LETAS event, finishing T2nd in the Czech Ladies Challenge in 2018 and 2019.

Overall, it was a strong week at the Montauban Ladies Open for French amateurs, with Marine crowned champion and Mathilde Delavallade firing the final day round of the day and setting a new course record 67 (-5) to jump from 58th spot to finish tied for 15th.

She commented on her perfect round: “I am glad I finished with a nice round. Everything was working out the way I wanted today, especially my putting. Overall, I had a great experience in this tournament and really enjoyed the week. The course was in a good shape, and I would like to say a special thank you to the volunteers.”