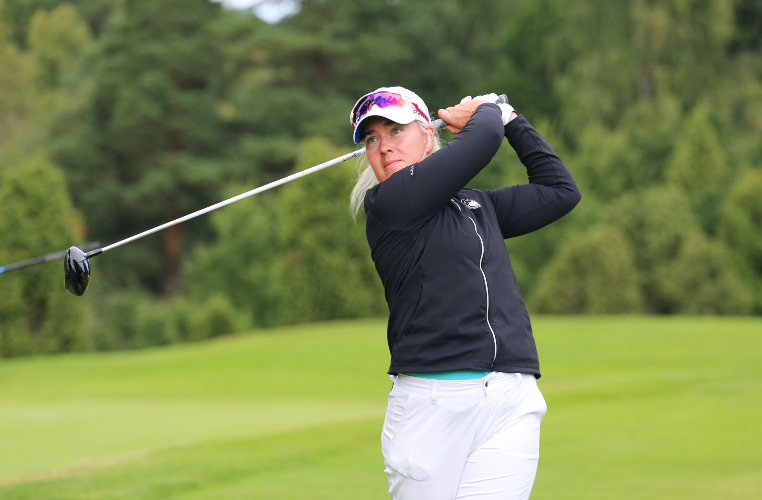 Norway’s Renate Grimstad fired a bogey-free round of seven-under 63 to lead the Elite Hotels Open after the opening day at Jonkopings Golfklubb.

The 25-year-old, who recently started her professional career began the round with early back-to-back birdies on holes two and three and added two more on five and eight to make the turn in 31 strokes.

“Two birdies early on definitely helped the momentum and I prefer to make birdies early on. One was a longer putt and the other was pretty close, so it was nice to see them drop,” said the Bergen native.

She did not hesitate on the back nine where she took the opportunities and made three birdies on holes 11, 15, and 18 to fire her personal best as well as the second-best score to par in the 2022 LETAS season.

She added: “It’s always cool to shoot low, but there’s something extra nice about a bogey-free round. I didn’t make many errors today which helped to gain confidence.

I like the layout of this course and played aggressively today which seemed to work pretty well so I’ll bring that with me tomorrow.”

Graduating from the University of Miami last year, Grimstad ended her amateur career within the top 80 on the World Amateur Golf Rankings and sits atop the leaderboard in only her second start on the LET Access Series today.

“It feels unreal. Six months ago, I wasn’t sure if I would be able to play golf again, so to be here this week and do this for a living makes me feel nothing but gratitude. It’s nice to be back in Europe and play a little closer to home as well.”

Having one collegiate win and 11 top-10 finishes in the US to her name, the rookie eyes her first professional triumph with confidence.

“Before my hiatus, I knew my game was good enough to play well on LETAS but to fire a good round and be in contention already feels special. I think I’m learning to trust my game and let go of the expectations and just enjoy the moment.”

Sara Kouskova from the Czech Republic put herself in contention again carding a five-under 65 and taking the outright second position on day one in Sweden.

The 23-year-old rookie started her round on the ninth hole, carding three birdies on the 10th, 15th, and 16th holes.

She dropped the only shot of the day on the 18th which she followed with three birdies on the next four holes to finish with five pars and a total of five-under-par.

Swiss amateur Vanessa Knecht signed for an opening round of three-under 67 to take the solo third place while seven players tie the fourth position.

The second round will start on Thursday morning at 8:00 local time.

After the completion of 36 holes, 45 professionals plus ties will make the cut.