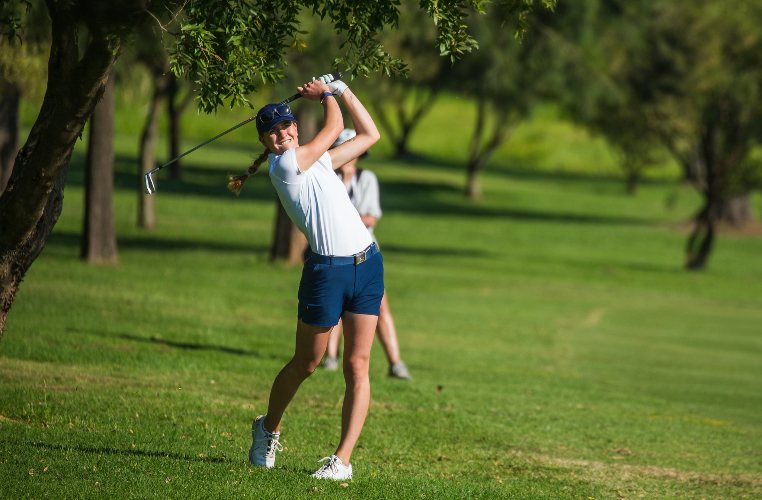 Nikki Hofstede fired a scintillating second round 67 (-5) to give herself a one-stroke lead heading into the final day of the Flumserberg Ladies Open.

The Dutch star was in inspired form around GAMS-Werdenberg Golf Club on Friday, as she rolled in seven birdies throughout the afternoon to put herself on -7 and ahead of the rest of the field with 18 holes left to play.

The 20-year-old made her mark right from the start in the second round, as she birdied each of her first three holes to put herself in the mix, before kicking on even further after the turn.

Competing in her first LETAS event of the season, Hofstede was delighted with her day’s play, as she returned to a course that holds some special memories for her.

“I played my first LETAS event here last year, so it was an advantage to know the course, but I feel it plays pretty different to last year because we were here later in the year,” she said.

“The rough is a lot higher at this time in the year and the greens are a bit more firm.

Having shot 70 (-2) on day one in Switzerland, Hofstede came into the day with some work to do to catch the overnight leaders who were two shots ahead, but she made light work of that deficit by bringing herself to -5 within her opening three holes.

A bogey followed on the fourth, only for a bounce-back birdie to keep her in contention as she went out in 33 (-3), before turning on the style as she headed home with two more shots picked up in her final nine holes.

A birdie on the tenth set the tone for her afternoon as she pulled level with clubhouse leader Emma Ambroise, before pulling clear with further birdies on 14 and 16, only for a dropped shot on the last seeing her lead cut in half before the final round.

She continued: “I stayed patient, I made a few silly mistakes but seven-under after two rounds isn’t too bad!

“I just need to keep hitting it where I want to and try to stay calm and stay in the moment. I have to be patient and wait for chances to occur and we’ll see what happens.”

Hofstede has three players two shots behind heading into the final day in Switzerland, with compatriot Lauren Holmey alongside France’s Emma Ambroise and Sweden’s Emma Nilsson on -6 after 36 holes.

Amateur Holmey – who resides in France but represents Netherlands on the national stage – continues to impress after a strong showing on Thursday, with four birdies and two bogeys on her card seeing her keep the pressure on at the top of the leaderboard.

Pinpoint accuracy on the approach has been the key to her success so far, as she put herself in the final group for Saturda’s final round.

“I stayed on the fairways a lot which helped me quite a bit, and I’ve hit 35 out of 36 greens on the last two rounds. I missed my first green on hole 17 today, so hitting them helps a lot,” she said.

“I holed a few putts yesterday, but it was quite a bit windier today so it was harder to get close to the pins but other than that it went good and I’m happy with my game and I’m feeling good.

“Tomorrow I just have to stick to what I’m doing because it’s going well so far, I’m going to try and get as close as I can to the pins and have fun.

An eclectic day of scoring also sees Ambroise share second spot after 36 holes, with the Frenchwoman’s front and back nines like chalk and cheese in Switzerland.

Having started on the tenth tee, the 25-year-old dropped a shot on 14 before picking it back up on 17, which saw her come through the 18th in level-par, which would be the last par she would make in her day.

Six birdies and three bogeys on her back nine saw the Metz-native rise up the leaderboard through her round, and she was delighted with her performance on the greens.

“My putting felt really good today, I made seven birdies today but also three putted three times, I kissed my putter on the last hole today because I loved it so much,” she explained.

“I didn’t make a single par on the back nine, just six birdies and three bogeys but overall it felt like a good day.

“I have to stay strategic tomorrow and to keep calm and patient, it’s my first time here, first year on LETAS and fourth tournament of my career, so I’m feeling good.”

Similar to Hofstede, Nilsson caught the eye with a 67 of her own on Friday, as the Swede didn’t drop a single shot throughout the day.

Birdies in her first two holes got the 28-year-old’s momentum going in the second round, before picking up shots on holes eight, 12 and 14 to give herself a chance of a chance of a fourth LETAS victory in Switzerland.

One of the overnight leaders Gemma Clews sits a further shot back on -5 as we reach the weekend after shooting 71, where she is joined by Germany’s Verena Gimmy who excelled with a second round 67.

The other frontrunner from Thursday was Michelle Forsland, who now sits in T7 after a level-par day to stay on -4, where she has Anna Magnusson and Emily Toy for company, while thee players share tenth spot on -3 after 36 holes.

In total, 58 players made the cut for round three, with the cut line coming at +4.