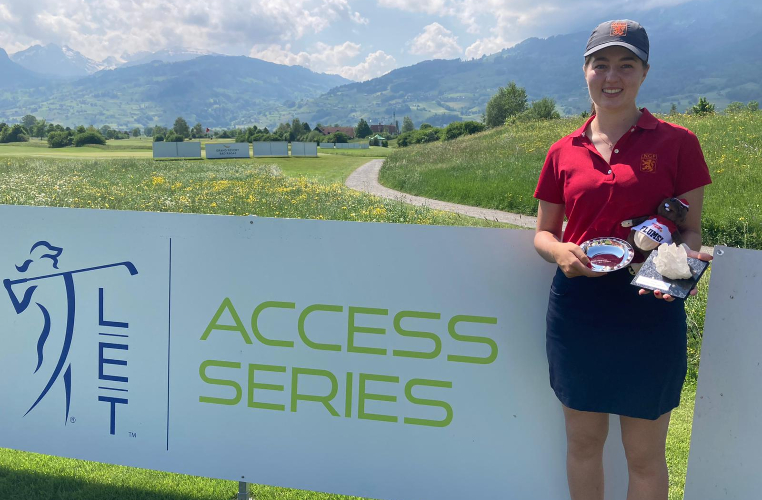 Dutch amateur Lauren Holmey is the 2022 Flumserberg Ladies Open champion after a final day round of 70 (-2) was enough to seal the title by a single shot in Switzerland.

The 19-year-old, who was playing in just her third LETAS event, was one shot behind overnight leader Nikki Hofstede at the start of the day, but kept her cool as her compatriot faded away to seal the victory at GAMS-Werdenberg Golf Club.

14 straight pars to begin her round saw the 2020 Dutch National Stroke Play champion hang in at the top of the leaderboard, before back-to-back birdies on the 15th and 16th were enough to see her over the line.

Holmey said: “It felt really good to get my first win in a professional tournament, I’m really happy!

“I had my dad caddying for me today and we learned a lot over the last few tournaments, and I think we made a really good team this week so that was nice.

“I changed my clubs a few months ago and I had a hard time adjusting, they’re quite different clubs so I was a little lost for a bit, but now I feel really good with my game.”

Rounds of 68 and 70 on days one and two respectively saw Holmey sit in a three-way tie for second spot heading into Saturday’s action, with France’s Emma Ambrose and Emma Nilsson of Sweden also locked on -6 after 36 holes.

But with both players shooting over-par on their final round, as well as leader Hofstede, it paved the way for Holmey to clinch the title, as she kept her cool around the course to not drop a single shot all day.

In fact, she only dropped three shots across all three rounds in Switzerland, with her consistency from tee to green a major contributing factor to her success, although she wasn’t aware of how well she was doing until her round was coming to a close.

“I didn’t know anything until I got to the 18h green, I just completely forgot I could check the scores on my phone up until the 16th, but by then I told myself I didn’t need to know.

“Once I checked on 18 I realised I just needed a par to win, so I had a little chip and a putt and it was done which was nice.”

One shot behind Holmey was Germany’s Patricia Isabel Schmidt, who rattled in eight birdies and an eagle on the way to a score of 66 (-6) on the final day.

It looked like the 26-year-old was out of the running after dropping four shots on the second hole, but her resilience was put to the test and she came through with flying colours, as she didn’t drop a single shot after that, going nine-under par through her next 16 holes, including birdies on each of her last four.

Sweden’s Anna Magnusson finished third on -6 after a final day score of 70 (-2), albeit having reached -8 with a birdie on the 13th, only for two bogeys on her last five holes to see her drop back into the pack.

Katherine Muehlbauer of Austria and German star Verena Gimmy shared fourth spot on -5 after 54 holes, with the former shooting 68 (-4) in a flawless round, while Gimmy registered four birdies and four bogeys on the way to a level-par 72.

Five players shared sixth spot on -4 to round off the top ten, with Fie Olsen (-2) and Erika De Martini (-1) moving themselves up the leaderboard on the final day, while early leaders Gemma Clews (+1), Emma Ambroise (+2) and Nikki Hofstede (+3) slipped away in the final stages.

In the LETAS Order of Merit, Holmey moves up to second on 500.00 points, just behind Italy’s Lucrezia Colombotto Rosso who has 534.00 after winning the Terre Blanche Ladies Open earlier in the season and securing a T23 finish in Switzerland.

The next LETAS event is the PGA Championship Trelleborg which takes place on May 19-21 at Tegelberga Golf Club in Sweden.