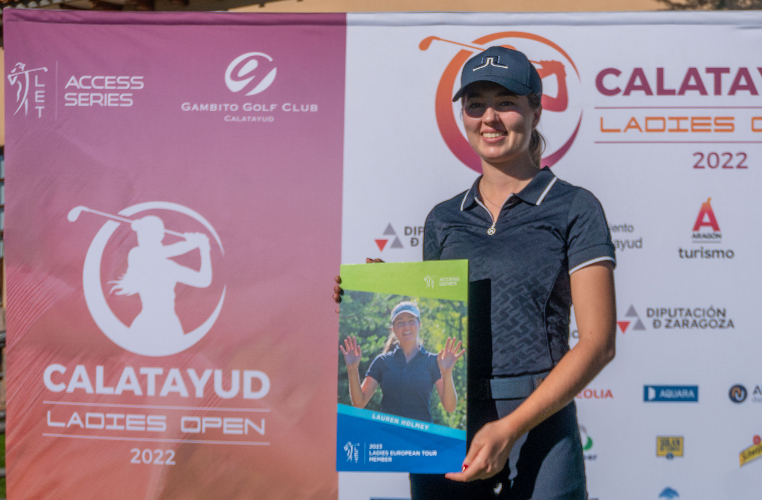 Dutch golfer Lauren Holmey has had quite the season on the LET Access Series from winning in Switzerland as an amateur to turning professional and clinching her place on the LET for next season.

Along with her victory, the 19-year-old also secured three runner-up finishes meaning she accumulated 1,620.30 points which was enough to finish fifth in the Order of Merit.

But despite having always known golf was the sport for her, it wasn’t until a few years ago that Holmey decided she’d like to be a professional and make it her full-time job.

“I started playing golf when I was about three, but I got my first lessons in my home club at the age of five,” said the LETAS winner.

“My dad plays, and he used to bring me along sometimes when going to the range. Eventually, he bought me a tiny club or two to keep me occupied!”

“I’ve personally always known golf was the only sport for me, but that doesn’t mean I always knew it was what I wanted to do in my life. I think I might have realized it a bit later than many other professionals.

“My parents always wanted me to have hobbies of my own growing up, friends on and off the course, and for me to be interested in many other things than golf. I’ve played golf almost my whole life but only realized and decided I would really like for it to become my full-time job when I was about 17 years old.”

Holmey secured her first professional win earlier this year at the Flumserberg Ladies Open in what was her first start in 2022 on LETAS and while she was still an amateur.

That victory was one of the best moments of the Dutch player’s amateur career, as was representing the Netherlands at the 2018 Youth Olympics in Argentina.

But after the summer, the teenager made the decision to relinquish her amateur status and finish the year as a professional.

“After having played almost the whole 2022 season on the LETAS, I knew I wanted to turn professional towards the end of the season,” she continued.

“I played in the European Team Championships as well as the World Amateur Team Championships this summer and decided that playing the last two tournaments on LETAS as a professional felt like a nice and natural way to finish the year! I’m now really happy to have made that decision.

“I made my LET debut in 2021 at the Big Green Egg Open which was a great opportunity for me to see how an LET event played out as well as the atmosphere on and off the course and I’m looking forward to next year.

“I’ve learned so much from playing on LETAS! I’ve learned what it was like to travel throughout Europe for weeks in a row, how to recover the best I can as well as managing the time I had in between tournaments.

“I’ve learned a lot about my relationship with my caddie and I’ve learned so much about myself. The LET Access Series really allows players to grow and become better versions of their golfing selves.”

That’s not an easy question! There are so many things! I like how fun golf is, how challenging as well as how rewarding it is. I like the values it has taught me and keeps teaching me, as well as the commitment it requires to play golf at a high level.

My earliest golfing memory would be crossing a water hazard for the first time on hole six of the little nine-hole course at my home Club le Golf National. I was so happy that day I still remember the shot very clearly!

I’m looking forward the most to being able to develop as a person and as a player while being able to compete throughout the world at the highest European level!

want to develop a game that allows me to be competitive at the highest level while being myself on and off the course and enjoying every moment!