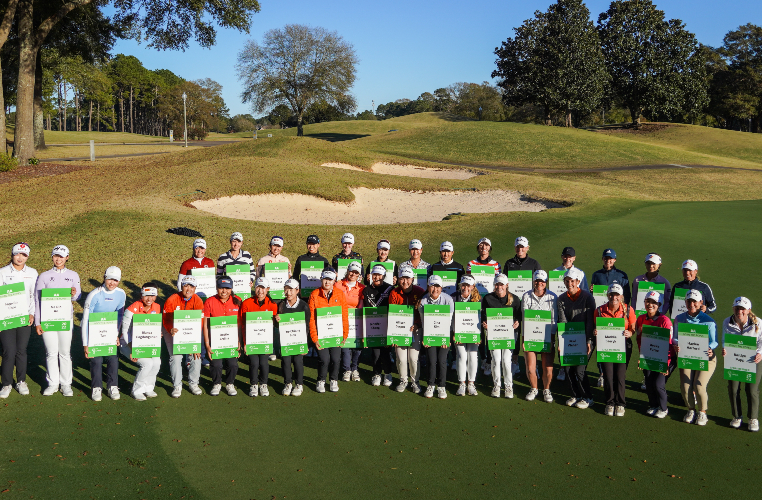 KLPGA winner Na Rin An posted a blazing 6-under 66 for the lowest score of the final round to earn medallist honours at -33 in an LPGA Q-Series. An beat out runner-up and Stage II medallist Pauline Roussin-Bouchard by one stroke.

Roussin-Bouchard is also among the new crop of talent making their way onto the Tour next year. After a gruelling even-par round that included five birdies, four bogeys and one double bogey, the Frenchwoman said she’ll build off the positives from this week with her Tour card in hand.

“If you ask me two weeks before if I’m going to be second, runner-up at Q-School and have my LPGA card I would’ve signed straightaway. I’m just very happy,” said Roussin-Bouchard.

“I’m not really allowed to say that, but I’m kind of frustrated of the last round. I guess it’s because I’m a competitor and I love competition and all that. But I had a couple friends stopping me from getting mad and be like, ‘Dude you have your LPGA card. Like that’s what you wanted.’ So, I’m just focusing on that right now and I can’t wait for what’s coming.”

2021 Race to Costa del Sol champion Atthaya Thitikul rounded out the top three at -26 after a final round of 69.

Denmark’s Emily Kristine Pedersen, who is a two-time Solheim Cup Team Europe member and was the 2020 Race to Costa del Sol champion, also secured her spot with a T14 finish on -12.

While two-time LET winner, Australia’s Stephanie Kyriacou, finished in a tie for 16th place on -11 to clinch her LPGA playing rights.

Players that finished outside the top 20 and ties also received 2022 Symetra Tour status.