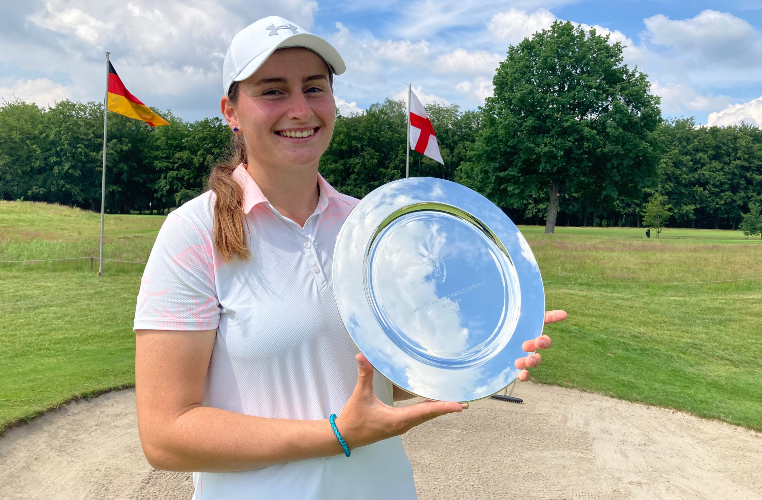 England’s Lily May Humphreys sealed her maiden professional win in her first start on the LET Access Series, after securing a six-shot victory at the Golf Flanders LETAS Trophy.

The 19-year-old, who turned professional at the start of June, opened the competition with a round of 70 before carding a 67 in the second round, which moved her up to second place overnight.

On the final day at Rinkven International Golf Club, the English rising star rolled in three consecutive birdies on the third, fourth and fifth holes to put her in pole position.

Humphreys, who was part of Team Europe at the 2019 PING Junior Solheim Cup, dropped two shots on the par-four seventh hole but bounced back immediately with a birdie on the eighth.

The teenager made three further birdies on the back nine including on her final hole to card a round of 66 and finish the tournament on 10-under-par.

“It feels amazing to have my first win as a professional and hopefully, it’s the first of many! It has been nice to play really well and get the win. It has boosted my confidence ahead of the next couple of weeks on the LET,” said Humphreys, who played on the LET in her first professional event – the 2021 Jabra Ladies Open – and finished T23.

“My strategy was to try and keep the ball in play off the tee because it was a very narrow course. I needed to hit whatever was possible – even if it was a three wood, I hit quite a few of those around here because I wasn’t driving exactly how I wanted.

“I holed pretty much everything today – apart from a three-putt from six feet on seven – but I holed everything else which was nice and takes the edge off the long game. Yesterday I putted well and holed a few, but I had a couple that lipped out whereas today all of them went in instead of half of them. It was the putter that won it for me this week.”

It was another consistent performance for LETAS Order of Merit leader Nina Pegova who ended her tournament with a round of 69 to finish T2 on four-under-par.

England’s Chiara Noja, who was the overnight leader, finished as the best amateur carding a final round of 73 to leave the 15-year-old T2 for the tournament alongside Pegova.