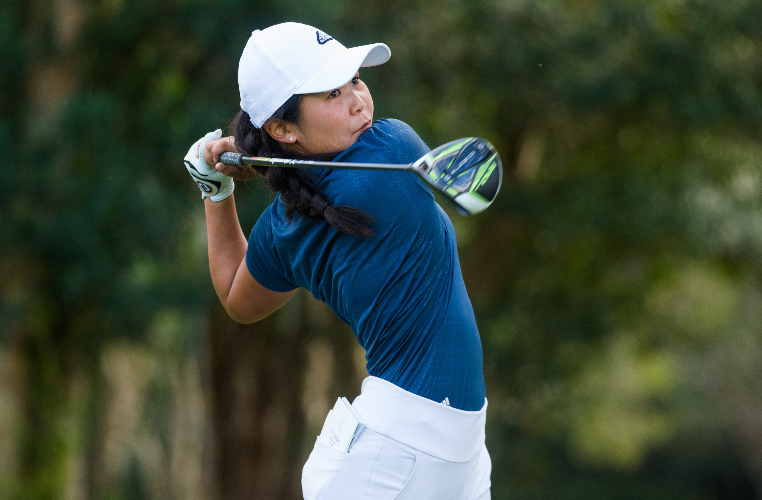 New Zealand’s Momoka Kobori is in charge by one shot at the Hauts de France – Pas de Calais Golf Open, having signed for 72 (-1) in the second round.

Kobori continued her great performance on the European continent and heads into the final round with a total of five-under-par.

The co-sanctioned tournament sees two separate fields, leaderboards, trophies and purses as LETAS and the men’s Alps Tour both compete at the Aa Saint-Omer Golf Club in the north of France.

Kobori started quickly on the tenth hole with back-to-back birdies and added another on the 15th to put herself in a good position, making the turn in 34 (-2).

Even though the leader made a birdie, a double-bogey and two bogeys on her back nine she still managed to keep her score in the red making it her eighth under-par round out of eleven on LETAS.

“The first two birdies helped a lot as it takes the stress off, especially when the conditions are getting tougher. So those were really nice to get a lot of early on,” admitted the 23-year-old.

“I’m happy with how I played today in the wind. It was definitely tougher today; I wasn’t expecting it to be that windy in the morning. You just have to adjust more to the wind so today was more of a challenge for me.”

Being in France is seeing history repeat itself as Scotland’s Hannah McCook is one shot back in second place.

The Scot, who finished runner-up after Kobori in Montauban carded seven birdies today en route to a one-under 72 to put herself in contention once again in France.

“It’s a bit of a déjà vu and a nice one because it’s good to feel like I’ve got a chance again. Since Momoka and I already played together before we got to know each other, it should be fun tomorrow,” said McCook, who is chasing her first LETAS win.

The Scot took two years off from competitive golf due to the pandemic followed by an injury, but she is getting more comfortable being at the top of the leaderboard.

She added: “Knowing I can be up there again and consistently is great. It is week five on the road and my hip still feels good so that is another positive for me.”

In outright third place is amateur Lauren Holmey from the Netherlands, who also added a second round of one-under 72 to be the last player in the red numbers.

Wrapping up the top 10 on one-over-par is Finland’s Niina Liias alongisde French duo Yvie Chaucheprat and amateur Lilas Pinthier. A total of 45 women made the cut with the line falling at nine-over after 36 holes.

In the men’s competition, where they play the course as a par 71, two players share the lead with Italy’s Andrea Saracino and the Netherlands’ Davey Porsius both at -3 heading into the final round.

The final round goes underway on Saturday at 6:30 CET with the LETAS leaders teeing off at 11:47 CET from the first hole.