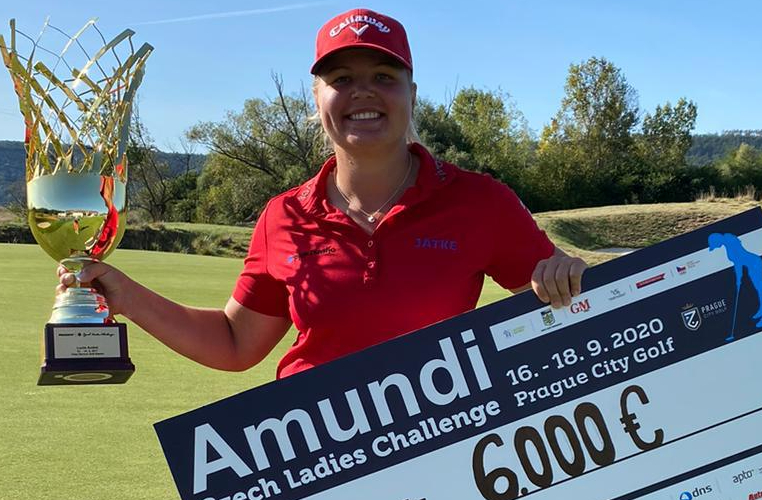 Finland’s Tiia Koivisto claimed a two-shot victory at the 2020 Amundi Czech Ladies Challenge to seal her maiden LETAS title, posting a final round of 68 (-4) to finish the week at nine-under-par at Prague City Golf Club.

“It feels amazing, I was pretty close last week but now I have finally done it. I made some important putts on the last three holes. I’m so happy.”

In search of her first career LETAS victory, Koivisto went close last week at the Flumserberg Open, which was won by friend and compatriot Sanna Nuutinen, and used the experience as motivation on course today.

Starting the day two-shots adrift of overnight leader Cara Gainer, Koivisto got to work immediately, reeling the Englishwoman in with birdies at the 1st and 2nd hole.

Taking the lead for the first time with an impressive eagle at the par five 4th hole, which was set up by a 210 meter shot with a five-wood, the 26-year-old made further gains at Nos. 6 and 10 to lead by as many of four strokes.

Winning is never easy, especially for the first time.

A brace of birdies for Gainer and a couple of bogeys for the Finn on the back-nine made for a tantalising finish.

“It was quite windy so I was just trying to hit the greens, I missed the green on the 16th and chipped it pretty close and then made an important 1 meter putt on the 17th for par.”

Holding a one-shot lead down the final hole, Koivisto sent her tee shot 30 meters past the flag, with playing partner Cara Gainer hitting it to 9 meters.

Rolling up to 3.5meters, the tension rose as Gainer approached her birdie putt to tie the lead.

Sliding past the hole, Koivisto stepped up to her right to left par putt and calmly rolled home to claim her first LETAS title and the €6,000 winner’s check.

“I felt a lot of nerves on the last hole but it feels great to know that my putting practice has paid off, in the first two rounds the longest putt I made was 2.5 meters, so to make some nice putts at the end feels amazing.”

England’s Cara Gainer did enough to finish in solo second at seven-under-par while Scotland’s Gabrielle Macdonald scooped third a shot further back.

Join us next week for the third stop on the LETAS schedule, at the Lavaux Ladies Open.