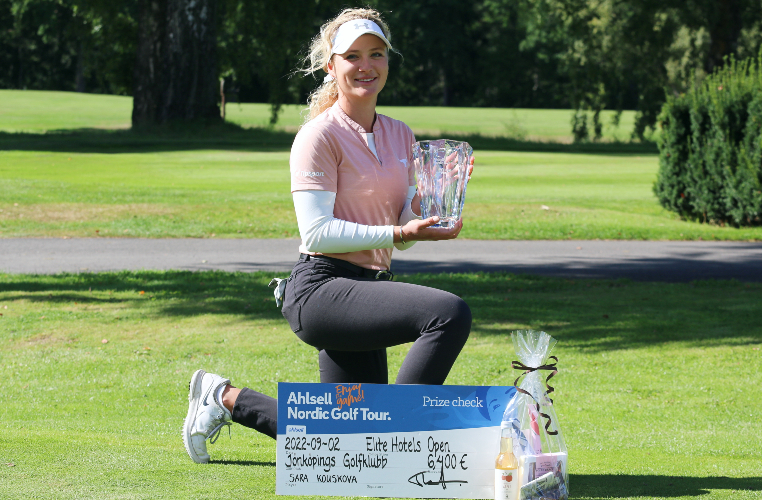 Czechia’s Sara Kouskova triumphed at the Elite Hotels Open securing her third win on the LET Access Series (LETAS) and a second one this season.

After rounds of 65 and 67 on the first two days at the Jonkopings Golfklubb, the 23-year-old champion started the third round with a three-shot lead and produced a final score of four-under 66 to seal another victory since turning professional this May.

It was a perfect start to round three for the Czech who opened the day with birdies on the first and third holes. Kouskova dropped one shot on the par-three eighth hole to make the turn in 34 strokes and maintain her lead at the halfway point.

“I had the same plan heading into the final round which was to hit as many greens in regulation as possible. The second plan was to remain patient throughout the whole round,” said the winner.

The 2021 Amundi Czech Ladies Challenge and 2022 Santander Golf Tour Malaga champion then produced a beautiful performance on the back nine carding birdie, eagle, and birdie on holes 13 through 15 to give herself a comfortable four-shot lead with three holes remaining.

“It wasn’t easy today, but I kept telling myself to stay focused and that if I stay patient, the birdies will come. I managed to hit it really close on the 13th and the eagle on 14 was just a cherry on top as I tapped in from less than a meter.”

Although the University of Texas graduate dropped a shot on the final hole, she still maintained her initial three-shot lead and celebrates her ongoing success.

“I am beyond excited, and I truly enjoyed the last two weeks in Sweden. My game has been at a level that I expect from myself.

“I am glad that my plan to focus on LETAS in the second half of the season has been going well. I believe that I can keep playing great in the upcoming events and at the same time I am excited to go home now, recover and practice.

Amateur Vanessa Knecht from Switzerland has been applying pressure on Kouskova throughout the day, matching her round of the day with four-under 66 to finish in outright second place.

En route to a total score of -9, the runner-up produced an error-free final round with two birdies on holes four and five, making the turn in 33 strokes and two shots behind the leader.

With another birdie on the par-three 11th, Knecht found herself only one shot back, but the winner’s upcoming stretch ensured her dominance.

The 25-year-old Zurich native added one more birdie on the par-five 14th to sign for a flawless round and improve her best finish on the LET Access Series.

Norway’s Renate Grimstad joined the podium finishing two shots back as she also carded 66 strokes in the final round and placed in outright third in her second LETAS start.

Emma Thorngren continued her good form on home soil and finished as the top Swede in outright fourth place at -4 while compatriot Corinne Viden was two shots back and in solo fifth.

Two more Scandinavians shared the sixth position as Norway’s Dorthea Forbrigd and Sweden’s Ellinor Sudow both finished on -1 after the final day in Jonkoping.

The LETAS schedule sees a week off and the season will continue with the ASGI Lavaux Ladies Open from September 14–16 in Switzerland.