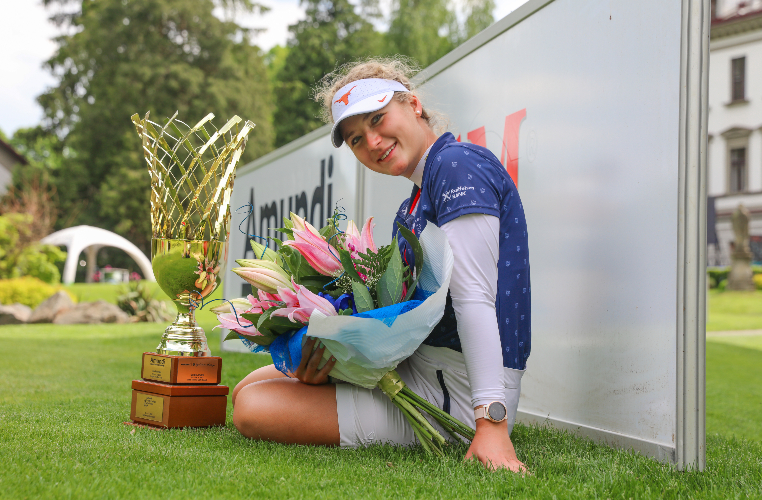 Amateur Sara Kouskova claimed the Amundi Czech Ladies Challenge win and made Czech history as the first amateur to win an LET/LETAS event.

In her first start since returning home for the summer holidays, the University of Texas student showed dominant form in the first LETAS event of the 2021 season.

Commenting on her win, Kouskova said: “It feels amazing, especially at home. I am very grateful for the opportunity to be here and experience it here at Konopiste with my family and friends.”

Kouskova shot her highest round of the tournament but still stayed under par. “I started a little nervously on the first couple of holes, then I got in a good mood a little bit. But then I had a little hustle on number ten,” said the champion who shot a one-under-par in the last round even with a double-bogey on the tenth.

Kouskova still has one year left of studying in the United States and plans to play the LPGA Q-School this year. “It’s definitely great to feel the momentum of the game here and hopefully I will be able to maintain it going into the Q-School,” she added.

Russia’s Nina Pegova was the best professional in the tournament, finishing second after shooting 71-67-72 (-6) and taking home the check for €6,000. Pegova finished four shots ahead of the four players sharing third place.

“I am feeling very happy mainly because I was not able to travel to Europe due to travel restrictions last year and it has been almost two years since I played tournaments in Europe,” said the professional winner.

“I am very happy with the way I played here at Konopiste because of the long gap I had in between the tournaments. The conditions were perfect every day; the course was in a great shape, we had amazing weather and I really liked the whole event.”

Four amateurs finished in the top-10, including 15-year-old Klara Sionkova who shot three stable rounds of 73, 70 and 71 and shared third place at two-under-par with amateurs Elena Colombo and Tereza Melecka, and professional Verena Gimmy.

“I am grateful for this experience, I played really well, and I am leaving with overall great feelings,” said the young local star. “My plan is to play in a few amateur events at home, and I would love to play the Tipsport Czech Ladies Open later this month, but I am unsure if I will have the chance to compete there.”

Germany’s Gimmy fired 74-67-73 to place T3 in her first professional season. “I worked really hard during the last few months, so I am happy with the result,” said Gimmy. “I have to say my attitude was the strongest part of my game, I believed I would hit good shots and make a lot of putts.”

Swiss amateur Colombo also tied for third place after three great rounds of 69-74-71 (-2). “I am feeling amazing after playing well on this beautiful golf course that put a lot of pressure on the players. I want to turn professional this year, so I am very happy to finish in top-10 here,” commented Colombo on her performance.