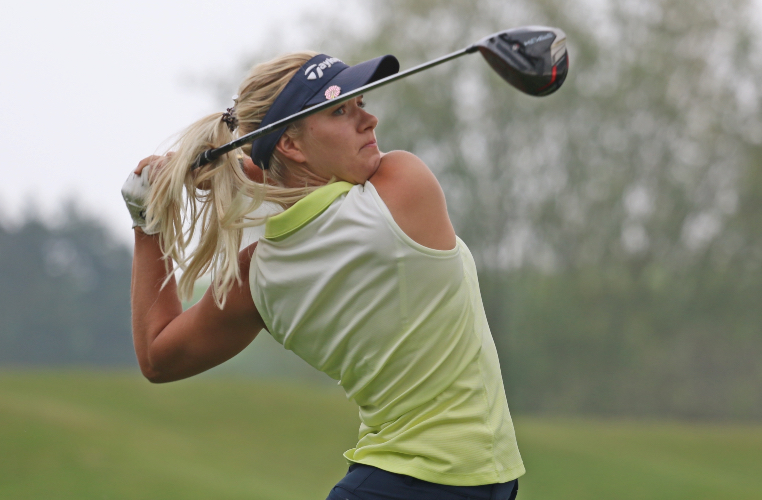 Finland’s Karina Kukkonen signed for a one-under 70 in the second round of the PGA Championship Trelleborg to take the solo lead at -6 in Sweden.

She was one of only two players to shoot under par in today’s windy conditions that were following the players around Tegelberga Golf Club, with local amateur Matilda Bjorkman the only other player to score in the red side of par.

The 26-year-old had a consistent round in the tough weather and carded 15 pars alongside two birdies on holes 8 and 15 and a single bogey on the second-to-last hole.

“I’m rolling it in well now after I’ve changed my routine a little bit, I like change,” said the leader, who is looking to raise the trophy for the first time in her professional career.

“The course is really good and challenging, and I like the layout. Now I am going to work on some technique and go over the shots I want to hit and then I can execute it tomorrow.”

Kukkonen – who gained a lot of experience on the Ladies European Tour in the last two seasons – will open Saturday’s final round two shots ahead of Zhen Bontan from the Netherlands, who currently sits at -4 for the tournament.

The Dutch player carded a round of 72 (+1) and came back within a two-shot reach with her third birdie of the day on the 17th hole. Bontan is also chasing her first professional win this week in Sweden.

Two more players are sitting under par at -1 after two rounds. Tied for third is Sweden’s Moa Folke after shooting four-over 75 today, and French amateur Emma Falcher who showcased two consistent rounds of 70 and 71.

Sharing fifth spot on the leaderboard at level par are Austria’s Katharina Muehlbauer, Spanish duo Teresa Diez Moliner and Noemi Jimenez Martin, and Swedish amateur Bjorkman who joined Kukkonen with the round of the day 70 (-1).

Rounding up the top-10 are two Swedish players with a score of +1 after day two in their homeland. Anna Magnusson shot level par today (71) while local amateur star Meja Ortengren signed for a 74 (-3).