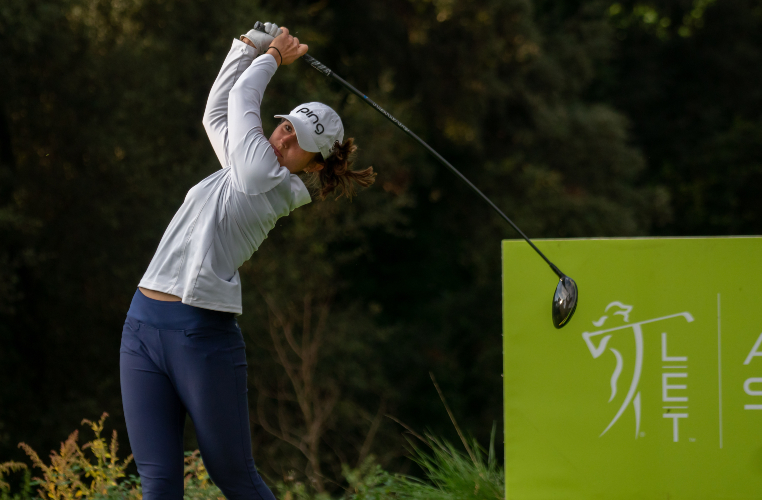 France’s Charlotte Liautier showed her consistency at the Santander Golf Tour Barcelona after producing another round of 71 (-1) to lead by two shots.

The 22-year-old amateur shared the overnight lead alongside Spanish amateur Anna Canado and carded a similar round on the second day at Real Club de Golf El Prat.

Four birdies and three bogeys ensured Liautier, who has had four LETAS top-ten finishes in 2021, sits top of the pile on two-under-par with one round remaining in Barcelona.

Finland’s Emilia Tukiainen produced the round of the day, firing a 68 (-4) to climb up the leaderboard and be in a share of second place.

The Finn began her second round with a birdie on the 10th before dropping shots on 11 and 13, but she then got into a groove and rolled in five birdies during the rest of the day to be even par for the tournament.

Alongside Tukiainen is England’s Rachael Goodall and home favourite Mireia Prat, who carded rounds of 71, as well as German amateur Helen Briem.

And the Spaniard is enjoying being able to play at a course that she knows so well in front of her family.

“Today the truth is that I played very tidily, the greens were harder than yesterday, and it was difficult to stop the balls but that’s how this course is! It’s the most difficult thing it has. You have to know very well where to drop the balls. I made several long putts that gave me a good end to my round,” said Prat.

“I really like playing here, on my course. It makes me very excited to play here because it is where I train every day and having my family supporting me is even more special and it is very enjoyable.”

In outright sixth place on three-over-par is Sweden’s Sofie Bringner, who is fourth in the LETAS Order of Merit.

One shot behind is the trio of Germany’s Verena Gimmy, Italian amateur Erika De Martini and Czechia’s Sideri Vanova.

While Danish amateur Emma Bunch rounds out the top ten on five-over-par. The cut fell at +12 with 59 players making it through to the final day.