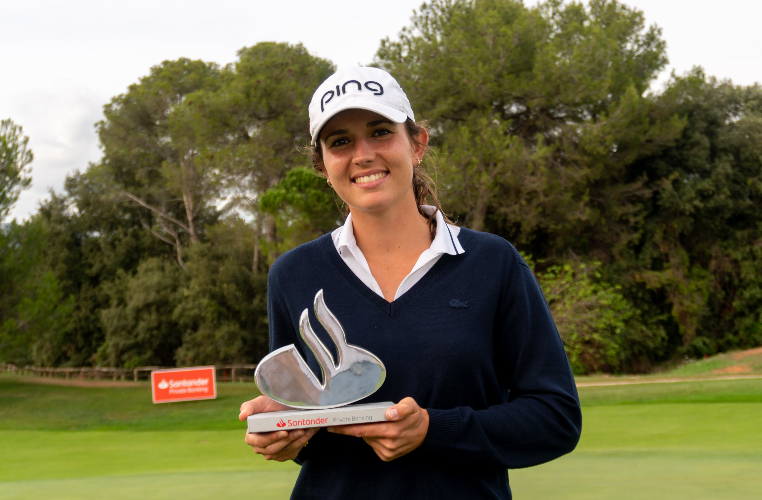 French amateur Charlotte Liautier secured a one-shot victory at the Santander Golf Tour Barcelona after shooting a final round of 74 (+2).

All week, Real Club de Golf El Prat has proven to be a tough test for the players and on the final day, only two players shot under par.

Liautier began her round with a bogey at the first, but immediately rolled in a birdie at the second before making a double bogey on the seventh hole.

However, an eagle on the par-five ninth ensured the Frenchwoman made the turn level for the round.

Three bogeys and a birdie on the back nine were enough for the 22-year-old to finish level par for the tournament and clinch her first LETAS win.

“It’s been an incredible week! It’s my best win to date and my first professional win and for that I’m very happy. I played very well during the week on a very demanding course that was in perfect condition,” said Liautier.

“Being with my boyfriend, caddie and coach on the bag has helped me a lot throughout the week. It has been one of the keys. The course demanded to catch a lot of green, and putting has been fundamental to be able to win. Thanks to Santander and all the sponsors who make it possible for us to play in these courses and these tournaments.”

German amateur Helen Briem, who was a winning member of Team Europe at the 2021 PING Junior Solheim Cup, concluded her week with a round of 73 (+1).

The teenager finished on one-over-par for the tournament and shared second place alongside England’s Rachael Goodall, who also carded a 73 on the final day.

Four shots behind second place was Nigeria’s Georgia Oboh, who recorded the best round of the day – a 69 – with one bogey on the front nine and four birdies on the back nine.

Alongside Oboh in T4 on five-over-par is Czech golfer Sideri Vanova after she shot a final round of 73 in Barcelona.

A trio of players finished in a tie for sixth place including home favourite Mireia Prat – the best-placed Spaniard – as well as Sweden’s Sofie Bringner and Finland’s Emilia Tukiainen.

Czechia’s Kristyna Napoleaova produced an even par final round to be ninth on seven-over-par, while Germany’s Patricia Isabel Schmidt carded a 70 (-2) to move into T10 alongside four other players.

At the end of the final LETAS event of 2021 the top six in the Order of Merit clinched their LET cards for 2022 and they were Lily May Humphreys, Gabrielle Macdonald, Nina Pegova, Goodall, Bringner and Tukiainen.