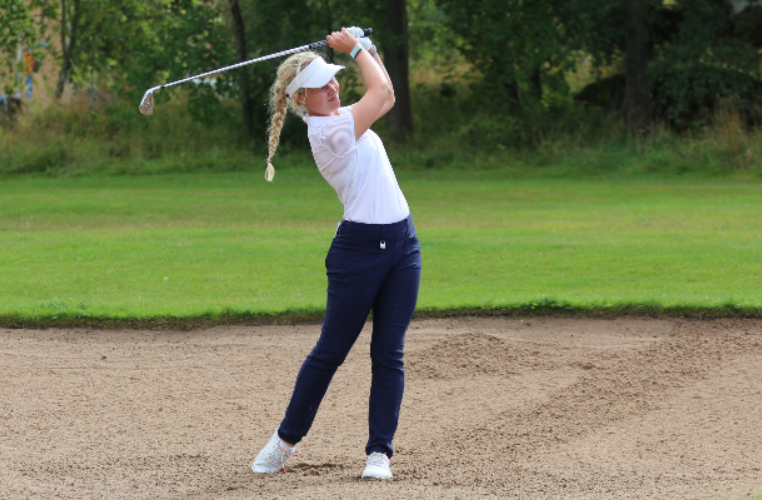 Scotland’s Gabrielle Macdonald has a three-shot lead heading into the final round of the Allerum Open.

The 27-year-old carded a round of 70 (-2) for the second day in a row and she will enter the final round with a three-stroke advantage from four other players.

The leader had a bogey-free round today in Allerum as she started her day with nine pars in a row before adding two birdies on holes 10 and 12.

She commented: “The conditions were tough as it was really windy today. I played well all day and knew that pars were good in those conditions. I’ve played here as an amateur and also two years ago, so I know the course well. Hopefully I just keep doing what I have been and enjoy it out there tomorrow.”

Four players sit on one-under-par after day two and are tied in second place including England’s Lily May Humphreys who added a one-under-par (71) to yesterday’s even-par.

The Englishwoman, who finished second last week, found herself on -3 after carding four birdies and a bogey but dropped two shots on the par-four 17th.

“I’m pretty happy with today’s round apart from messing up 17 but it’s still a good score considering the conditions. I think your mental game is one of the most important things when playing in these conditions, like staying patient and not chasing after a score,” she said.

“I’m not used to having events this close to each other so I’m learning as I go but I’ve tried to do everything I need to feel prepared without over doing it and that seems to be working so far!”

Muehlbauer said: “I am very happy with the way I played. It was really tough out there today with the wind and rain, so I tried to hit the fairways and greens and I am happy how I managed to do that today. The key is to be patient and stay focused on every shot. Bogeys can happen in these conditions, so accept the bogeys that happen and try to keep the ball in play.”

Sweden’s My Leander sits in solo ninth place on one-over-par while the trio of England’s Molly Lawrence, Sweden’s Anna Magnusson and France’s Lucie Andre are T10.