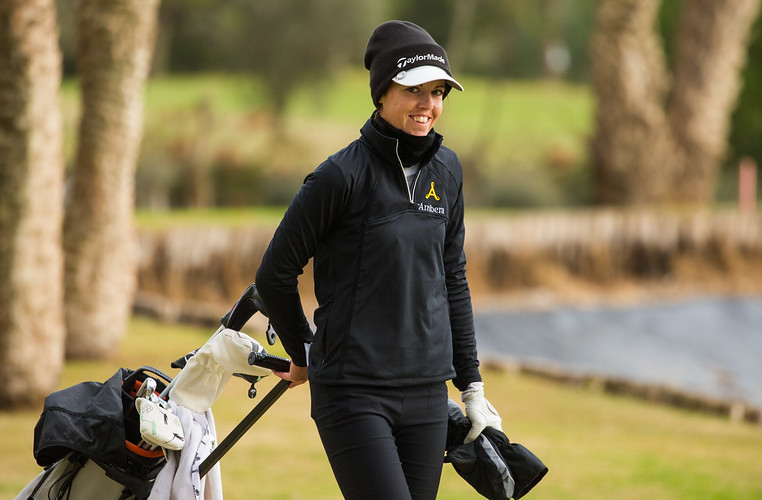 England’s Meghan MacLaren posted a round of 73 (E) to lead by one-shot on the third day of the Final Qualifier at LET Q-School.

The 27-year-old, who teed it up on the South Course at La Manga Club on day three, got off to a good start with two birdies on her front nine.

Then three dropped shots in three holes saw MacLaren’s advantage slip away but she bounced back with a birdie on the last to finish level for the day.

“It wasn’t as windy today, so I think it played a touch easier – maybe not according to my score – but it felt a bit more comfortable out there,” said the 2017 LET Access Series Order of Merit winner.

“I hit a lot of good iron shots today and I was in control of the golf ball, I wasn’t quite as confident on the greens as I have been but it’s not a bad place to be.”

Speaking about her mistake on the 13th, the two-time LET winner was glad to bounce back with a birdie at the last.

“It was a really bad hole. I shouldn’t have made the mistake I did, but I’ve had a very long year, and this is a very long week. There’s bound to be a patch where I make some mistakes, so I just tried to tell myself and keep on playing – it was nice to get the reward at the end,” she continued.

“Today was the best I’ve felt mentally, and I could see myself getting a bit ahead of myself for the first time, but it’s helped me to keep things more simple. It’s easy in a situation like this to try too hard, because everyone wants this so badly, but my fatigue has helped me just concentrate on the things that matter, so I’ll try to keep that going.”

Sweden’s Linn Grant produced a round of 68 (-3) on the North Course to move into a share of second place on the leaderboard.

The 22-year-old went bogey-free on day three with birdies on the seventh, 10th, and 18th holes to be five-under-par for the tournament.

“It was steady out there today, I was bogey-free which is always nice, and it was just steady golf. There were a few putts that weren’t rolling in but apart from that, a good day,” said the 2017 PING Junior Solheim Cup player.

“I think the South Course is the tougher one. Before the second round, I hadn’t played it but now I have that experience and I will concentrate on fairways and greens like usual and we will see what happens tomorrow.”

Alongside Grant is France’s Manon Gidali, who carded a level-par round of 73 on the South Course with two birdies and two bogeys.

“Today was a little difficult for me – at the beginning I was a little bit stressed – so I feel like I didn’t play my game for the first six holes, but then I started to roll in the putts and then it was a lot better,” said the Frenchwoman.

“I made two birdies in a row to give me my confidence back and then I played really good but didn’t make putts, I think level-par is a pretty decent score on the South course because it’s definitely the toughest course.”

Sweden’s Lisa Pettersson, who topped the standings at last week’s Pre-Qualifying, produced a bogey-free round of 67 (-4) on the North Course and now sits T4.

“I had a lot of fun today, I hit a lot of greens like I did last week which I struggled with on my first round on the North course in this tournament,” said Pettersson.

“It was nice to get back into hitting greens and giving myself good chances to get birdies, it was a good day – it wasn’t as windy as I expected – so it was nice.

“I’m just going to stick to my gameplan, hit one shot at a time, have a lot of fun and relax. The wind can do a lot so it’s all about staying patient and knowing when to attack.”

Pettersson has a total of four-under-par and sits on the leaderboard alongside Moroccan amateur Ines Laklalech and American Gabriella Then, who posted rounds of 72 (-1) and 68 (-3) respectively.

France’s Agathe Laisne and Switzerland’s Anais Maggetti are T7 on three-under-par with five players in a share of ninth place one shot further back.

One of those players is Czech amateur Sara Kouskova who fired the joint-best round of the day – alongside Marion Duvernay – with a 67 (-6) on the South Course to catapult up the leaderboard.

Kouskova, who won the AMUNDI Czech Ladies Challenge on the LET Access Series this year, was bogey-free and believes her game is heading in the right direction.

“I think I started hitting my irons a little better because I kept struggling a little with the ball contact – that was much better today. My putting was alright, but I was close on almost every hole,” said Kouskova.

“I just kept putting and some of them dropped in which was nice. I saved a good par on 17 which was the only possible threat for a bogey all day. It was a really nice round and I’m really happy.”

There will be a cut following the fourth round on Sunday with the top 65 and ties progressing through to the final round on Monday.