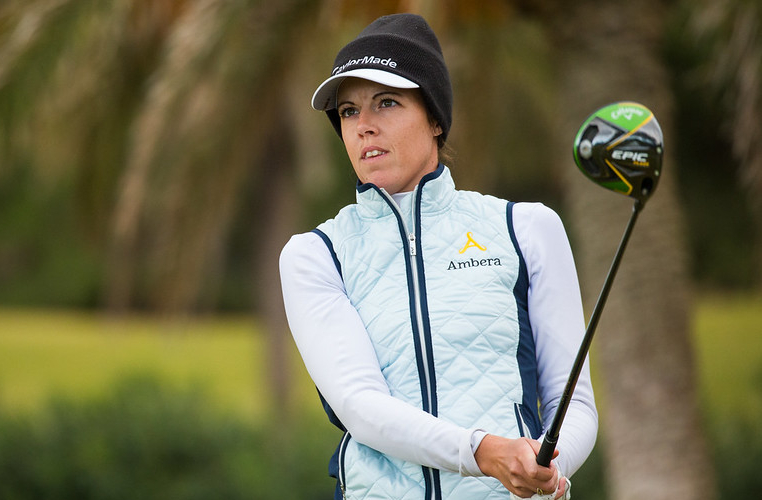 Meghan MacLaren continued her consistent form with a round of 69 (-2) on the North Course to lead by one shot at La Manga Club.

On the fourth day of the Final Qualifier at LET Q-School, the English golfer rolled in three birdies and one bogey to give her a total of eight-under-par.

“It felt a bit calmer today, the wind was in a slightly different direction and the greens were a bit softer from the rain last night, so it felt a bit more scoreable today,” said the 27-year-old, who won on the Symetra Tour in 2021.

“That’s probably the best I’ve hit the ball tee to green this week – I was really pleased with that – I was much better off the tee than I have been so I felt I could step up and be aggressive and give myself some chances from there, which made things a lot less stressful than they have been.

“I’ve played solidly all week and I’ll try and minimise the mistakes – I seem to throw one in every round – so hopefully I can get through without doing that tomorrow.”

Sweden’s Lisa Pettersson, who won last week’s Pre-Qualifying, posted a round of 70 (-3) on the South Course to move into second place.

After starting her round with a bogey, the 26-year-old rolled in a birdie on the 11th before dropping a shot on 13.

But the Swede bounced back with a birdie on 15 and finished in style, rounding out with an eagle on the 18th to put her at seven-under-par.

“I started with a bogey on the first hole, but I just tried to stay calm and keep hitting greens because it makes it a lot easier if you do. Finally, some birdies dropped, and it was nice to finish with the clutch putt for eagle on the last hole,” said the East Carolina University graduate.

“I hit a pretty good drive, but it went a bit to the right, so I still had about 178m, and the wind was helping so it wasn’t too much of a club. Then I had a 16m putt with a lot of break, so we were all surprised that it went in, but it was a fun ending to the day.

“It’s great to get some confidence going into tomorrow and have a good feeling, so it helped to finish strong.”

Three players are in a share of third place with French duo Agathe Laisne and Manon Gidali plus American Gabriella Then on six-under-par.

Two-time LET Access Series winner Laisne carded a round of 70 (-3) on the South Course to climb further up the leaderboard.

“It was difficult at the beginning because I was a bit tired, and it was hard for me to putt on the greens,” said Laisne, who secured status on the LPGA Tour last week.

“I was always going short on the uphill putts but then I got the hang of it and started fighting a little bit more, and it was good to have my caddie there to support me.

“I did not do a lot of practice rounds – I only did six holes on each course, because I knew it was a very long week again. That was good for rest, and after the rounds I nap, go to the physio, rest a lot and drink water.”

Gidali produced a one-under round on the North Course and is sticking with her motto of enjoying this week at Q-School.

“I had a good start with the birdie so that gave me confidence, but then I didn’t really make good putts today because I didn’t have the speed and stayed short most of the time,” she said.

“My mantra is to enjoy my time here and do the best I can, I’m not going to calculate anything in my head or look at the scores, I’m just going to stay in the present, hit some good shots and we’ll see what happens.”

Germany’s Sophie Hausmann carded a round of 68 (-5) on the South Course to move to sixth place on four-under-par.

Czech amateur Sara Kouskova, Sweden’s Linn Grant and Finland’s Emily Penttila sit T7 one shot further back, while four players are in a share of 10th place on two-under-par.

The cut fell at +8 with exactly 65 players making it through to the final day of competition, which will see the field tee it up on the South Course.