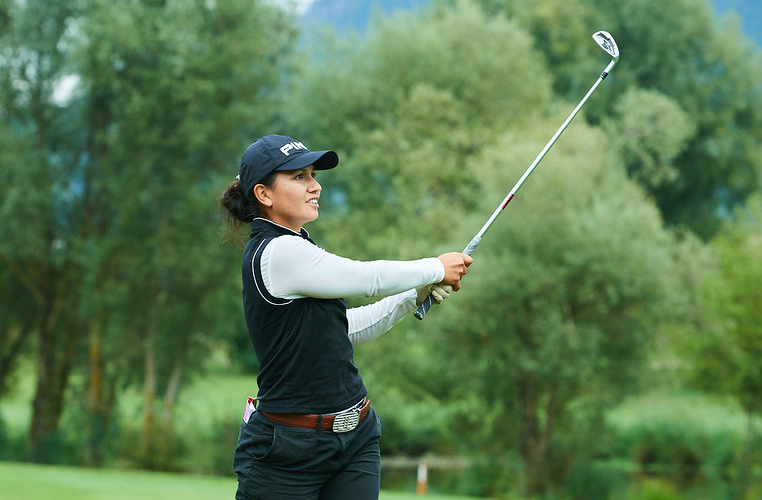 Thalia Martin only turned professional earlier this year but a matter of months later is making her first appearance LET Q-School.

The Englishwoman made her LET Access Series (LETAS) debut at the Golf Flanders LETAS Open in June where she finished in a tie for fifth.

A month later, she finished T18 in the ROMA ALPS LETAS Open – a mixed event which saw men and women competing on the same stage.

At the end of the summer, the 25-year-old made her LET debut when she played in the ISPS Handa World Invitational after she qualified having been the leading female at the Northern Ireland Open.

Despite a whirlwind start to professional life, Martin has taken a lot on board in her first year on Tour where she finished 11th on the LETAS Order of Merit.

“The year has gone so quick. In the back end of the year, I was just trying to enter as many LET Access Series events to try and climb up the Order of Merit,” said Martin.

“I had a little bit of a rough patch in Sweden. Other than that, it was really good and smooth. I had a few top-ten finishes, didn’t scrape into the top 6 but it was tough out there with all the competitors.

“I realised that you should try and enter as much as you can really. It was a good learning curve this year and I really enjoyed playing on both Tours. My experience at ISPS Handa World Invitational with the LET co-sanctioned event was great, it was just the same vibe as LETAS. I think Access really helps you because it is nothing different to what I have already experienced. It was good preparation.”

The LETAS season concluded at the end of October in Barcelona and since then Martin has been preparing to make her Q-School debut.

Thanks to her ranking on the LETAS Order of Merit, the former tennis player was exempt into the Final Qualifier and is taking a relaxed approach.

“With the friends that I made on the Access Tour, I managed to train out in Spain to prep for Q-School with them. We have been trying to get used to the Spanish soil,” she said.

“This is my first Q-School and first time at La Manga Club. It is different to any other tournaments because you’re playing for survival really and it is not about winning as such because it is about the top-20. You have a match play sort of feel too.

“The mental state is different this week and I feel a little bit more chilled out. I feel ready to get back to tournament golf again. I’m looking forward to it and La Manga is a great resort.”

This week Martin has her coach Adam Chamberlain on the bag with her so that she can get used to playing tournament golf with a caddie alongside her.

“My coach is here but this week he is going to my caddie more than my coach because he knows my game. He caddied for me in Barcelona in prep for Q-School and that worked well, and we wanted to continue the partnership really and for me to understand what it is like to have a caddie. My mum is brilliant on the bag, but for the future it is trying to get used to having someone else on the bag,” she explained.

And though everything in her golf career has happened reasonably quickly so far, to be able to secure her LET card by finishing in the top 20 would be a ‘dream come true’ for the Peterborough native.

She added: “It would be a dream come true to get the LET card. I will try and finish as high as possible and go from there for next year. I’m really excited and it has been great being here and learning more about the LET.”