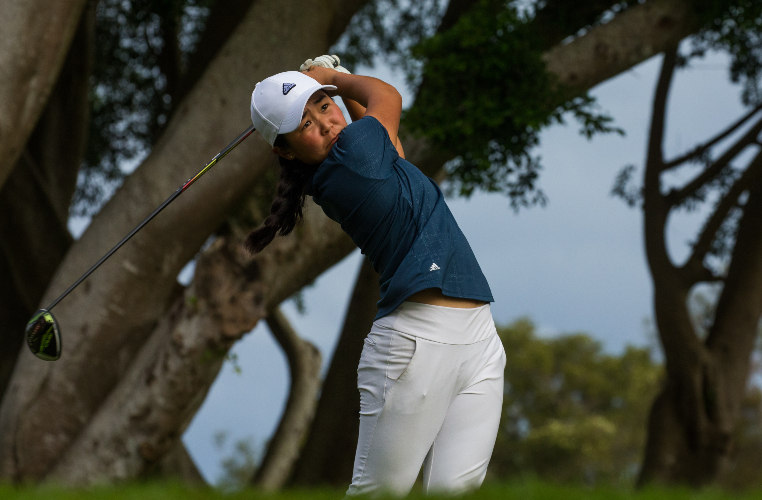 New Zealand’s Momoka Kobori sits atop the leaderboard heading into the last day of the Montauban Ladies Open after carding another round of 69 (-3) today.

The overnight co-leader holds a one-shot advantage after her second competitive round of golf in Europe and currently sits at six-under after two days.

Kobori signed for an error-free scorecard with fifteen pars and three birdies with the first birdie rolling in on the 11th hole.

“I managed to get a bogey-free round today which was exciting,” she said. “The front was a bit frustrating as I was hitting it close and giving myself chances but it just wasn’t rolling in.

“But early on the back nine I hit it rather close and made a birdie, so I just kept trying to give myself chances.

“It feels good that I can put some decent scores up overseas, in different conditions and on different courses. So far, my experience with competing in Europe has been really good.”

Scotland’s Hannah McCook sits only one shot back, after carding a round of 70 (-2) on day two.

And although she admitted she was nervous for most of her round today, the Scot sunk a 20-foot eagle putt in-betweentwo bogeys in the middle of her round.

“I hit a drive on the left side and from the semi-rough you never really know where it’s gonna fly. I kind of just chipped an eight iron which went to 20 feet and then it rolled in,” said McCook who went back to her old putter from 2018 earlier this week.

“I would have taken this at the start of the week. I was kind of nervous for the whole of today as it’s been a while since I’ve been in a situation like this.

“For tomorrow I’ve put myself in that situation and I’ll be happy if it works out, I’m proud I’ve got this part done. It’s nice to know I’m at the top of the leaderboard instead of just trying to make the cut which is a different feeling altogether.”

Sharing third place and another shot back on four-under-par are Scotland’s Tara Mactaggart and Australia’s Kristalle Blum.

In solo fifth is Marta Perez from Spain at -3 while three players share sixth spot after France’s Lucie Andre and Spain’s Noemi Jimenez Martin both carded one-under 71 today, while England’s Gemma Clews fired the round of the day – seven-under-par 65.

Clews said: “I feel really good, especially after yesterday when I struggled a bit. I gave myself a bit of telling off after that and my game was really good today.

“I hit a lot of shots close which helps but I managed to take the opportunities that I gave myself.

“I think I had the momentum going right off the first hole where I hit a really good tee shot and gave myself a decent chance as well.”

Rounding out the top-10 and in a tie for ninth are French amateur Louise Reau and compatriot Anais Meyssonnier, Sweden’s Anna Magnusson, Germany’s Patricia Schmidt and Scotland’s Clara Young.

A total of 66 players made the cut for the final round on Sunday, with the cutline falling at +10.