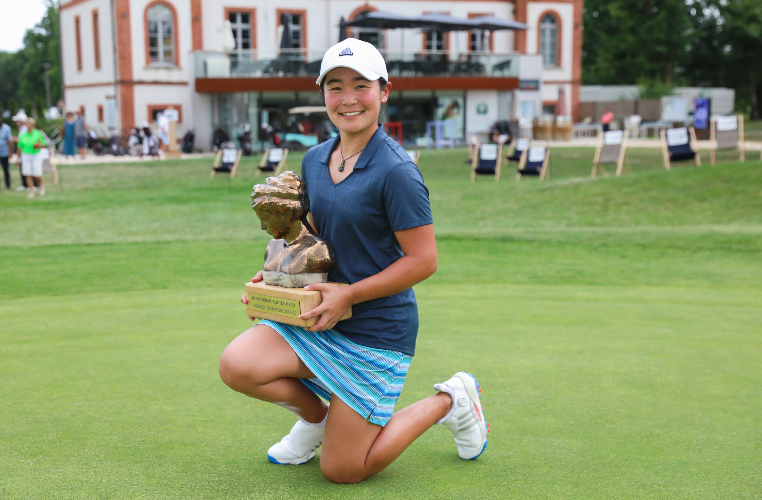 New Zealand’s Momoka Kobori triumphed at the 2022 Montauban Ladies Open after a thrilling final round with runner-up Hannah McCook finishing three strokes back.

Kobori started the final round one shot ahead of the chasing pack and fired a round of four-under 68 to capture her first win in her first European start.

“I am so happy with not only how I played but with the whole experience this week and with making the decision to come to Europe,” admitted the champion.

Kobori hasn’t dropped a shot since the 12th hole on the first day at Golf de Montauban and began her final round with back-to-back birdies.

The Kiwi then added another birdie on the par-three 10th and rolled in her final birdie on the 16th, which was enough to seal victory.

“It doesn’t happen very often to have a bogey-free round and to have two in a row is really amazing,” she said.

“I think the key for me this week was solid ball striking. I hit a lot of fairways and greens which really helped.”

The 2020 Pepperdine University alumna has a lot of playing experience in her home country, neighbouring Australia, and the United States.

However, Kobori did find it daunting to be leading a professional event during her first visit to Europe.

She said: “I was definitely nervous going into the round and coming down the last few holes. But I just really tried to focus on each shot I had in front of me and tell myself that I’ve been hitting it well and focus on the task I had ahead.

“I actually really enjoy playing in front of a crowd, so it was nice to see all the members and volunteers out there watching. I tried to soak that in and enjoy the last few holes coming in.”

Runner-up McCook put herself in contention for the win and ensured she kept putting pressure on Kobori during round three.

The Scot also rolled in two birdies on her front nine to make sure she stayed within reach of the New Zealander.

“I was so nervous on the first tee I was almost hoping just to make contact with the golf ball, but I flushed it,” she said.

“Then again, I was nervous pretty much the whole round but at the same time, I felt like I was quite in control. It was probably my most solid golf for 18 holes.”

After Kobori birdied 10, McCook responded with a birdie of her own on 11 as the players went head-to-head.

The 28-year-old tried to apply more pressure on the leader on the 17th hole with a solid drive, after Kobori found herself in the rough hitting a rescue into the green.

“I hit it so well and maybe was even too close to the green for that pin, but I thought that there might have been a chance,” described the Scot.

“It was a great battle and Momoka played really well. I don’t think she’s dropped a shot since the first day so hats off to that, that is actually amazing. I said, ‘welcome to Europe’ at the end because this was a great start for her.”

McCook came back to competitive golf this season after a two-year break, being affected by the pandemic followed up with an injury last season.

She added: “It’s been probably the first time in four years I found myself in a situation like this. It felt good to be back in that position and know I was playing really well.

“I think the nerves were a positive feeling for me because I was in contention until the very end. I focused on every shot as I knew I had a chance with each one, so I guess it does help me to stress a little bit more.”

British duo Sarah Gee from England and Clara Young from Scotland finished T7 on onr-under, while rounding out the top-10 at even-par were Germany’s Chiara Noja and Australia’s Kristalle Blum.

Siwtzerland’s Priscilla Schmid, who finished in 11th place, had a highlight on the final day after she aced the 10th hole for her first hole-in-one since turning a professional.

With her second-place finish, McCook made the most significant move in the LETAS Order of Merit as she jumped from 52nd up to ninth spot and she now has 365.70 points with Noja continuing to lead the way on 952.00 points.

The LET Access Series now heads to Denmark for the Smorum Ladies Open by EC Drive, which is taking place June 15-17.