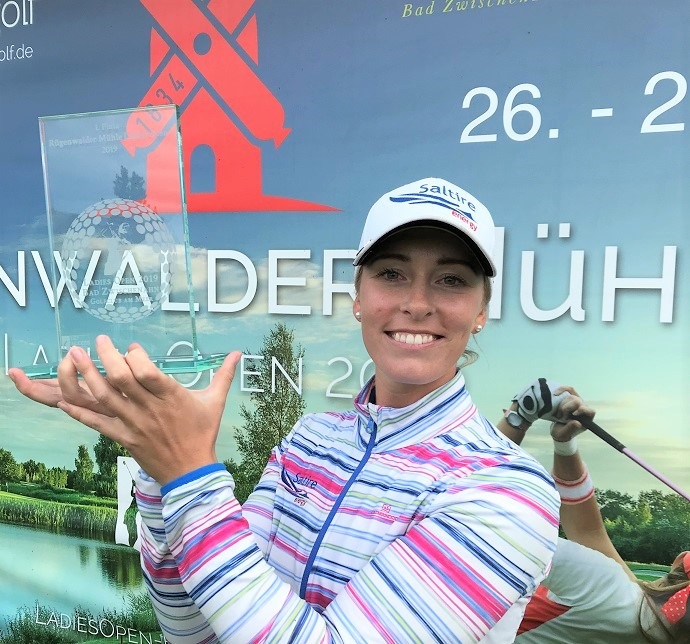 Scotland’s Laura Murray produced some sensational golf to claim her second LETAS title, with a -14 total, in the Rügenwalder Mühle Ladies Open at Golf Club am Meer in Bad Zwischenahn, Germany. The 31-year-old led from round one, opening with a stunning eight under par, 64, to take a two shot lead over Germany’s Luisa Dittrich who recorded a 66 on the opening day.

Murray was solid throughout the week, driving the ball extremely well and producing some impressive iron play. When the Scot looks back on her win, she will probably remember the decision to try out a different putter that sat at home for some three years without being used.

“If feels incredible, it’s really good. I’ve been working really hard for this all season and I feel I’ve been knocking on the door recently and nice to finally cross the line and get the job done. I think my attitude on the course was pretty good. I just kept telling myself to keep smiling and just concentrated on what I was doing and holed a few putts and that kept me smiling a bit more. I’ve been playing so solid it was quite a nice relaxing week for me. And my attitude certainly helped me through it.”

“I put this other putter in my bag. It’s been sitting in my apartment for like three years and I just thought why not let’s chuck it in. Yes, definitely, sometimes just changing something can get a different feeling and it certainly helped this week so I think that will be staying in the bag.”

Murray’s win has catapulted her into 4th place on the Order of Merit and she now is in within touching distance of securing her playing rights on the Ladies European Tour for the 2020 season, but Murray doesn’t plan to get ahead of herself.

“I’m going to approach it in the same way because it worked so well this week so now I know I’m 4th then there’s a good chance of securing that top 5 in the Order of Merit. I’m looking forward to see what we can do next week and to see what the course is going to offer and I’m sure it’s going to be a lot of fun.”

France’s Marie Fourquier edged into 2nd place with a final day 67 to better Lucrezia Colombotto Rosso by a shot, finishing -12 to Colombotto Rosso’s -11. Fourquier took her boyfriend, European Tour player, Adrien Saddier’s advice be a bit more relaxed on the course and it certainly paid off to produce the French player’s best finish on the LET Access Series.

Colombotto Rosso solidified her third place on the LETAS rankings going into the last event, the Road to La Largue Final, and like Murray, will hope to have her full LET playing rights for next season in a week’s time.

The season finale gets underway at Golf de La Largue in France, from the 4 – 6 October.