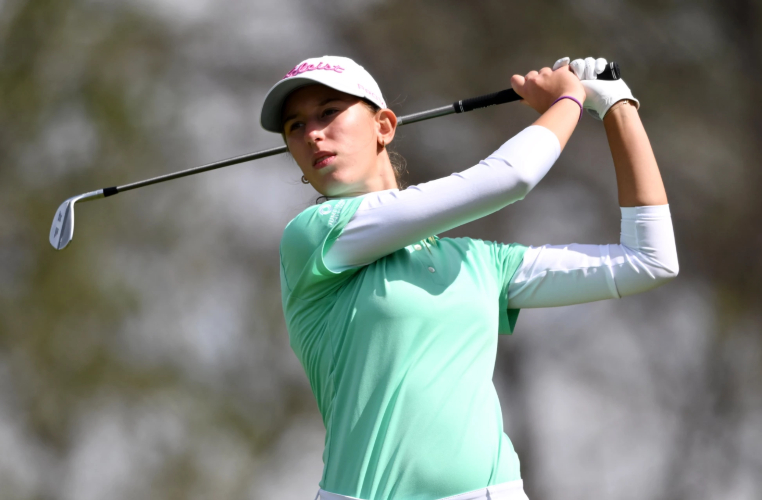 Chiara Noja and Yvie Chaucheprat both fired opening rounds of 67 (-5) to be at the summit of the leaderboard on day one at the Terre Blanche Ladies Open.

Tee times were delayed on the first day due to early morning fog around the course but play eventually got underway 90 minutes later than planned.

And once her round began, Noja got off to a hot start with three birdies in her opening four holes as she made the turn in 33 (-3) at Golf de Terre Blanche.

A dropped shot on the 11th was soon forgotten with a birdie on the 15th and the 16-year-old finished her round with a flourish making an eagle on the last to seal a 67 and set the clubhouse lead.

“It is definitely going to be a challenging week. It is weather conditions that I have not played in in a while because I live in Dubai and when I left to come here it was 41 degrees,” said Noja.

“Coming here and warming up in nine or ten degrees has definitely been tricky for me but I think I’m adjusting to that, and I have done an okay job so far.

“I got off to a pretty quick start today. I was playing well and striking the ball well, it was about converting some of those opportunities into birdies.

“I missed two or three birdies that I probably should have made, so the eagle on 18 was rewarding in that sense to have almost got those scores back. It was a very enjoyable round; a bit of a grind and we will see how tomorrow goes.”

Alongside the young German is one of the home stars – France’s Chaucheprat – who also fired a first round of 67 to be at the top of the table.

The 23-year-old rolled in birdies on the third and eighth holes to make the turn in 34 (-2) before making birdie-bogey-birdie on her next three holes.

Chaucheprat finished her afternoon’s work well picking up two more shots with birdies on the 14th and 18th to share the lead with Noja.

“After the delay, the conditions were great because it was sunny and warm with a little bit of wind at the end of the day,” said Chaucheprat.

“The course is in great shape. My six birdies were all within 3 metres, so I was really happy about my iron game. I made three birdies on three of the par-3s.”

Finland’s Karina Kukkonen sits in third place and is one shot behind the leading duo after a bogey-free round of 68.

Birdies on the second, eighth, 10th and 17th secured outright third place for the 26-year-old on four-under-par.

Lamoure made two bogeys and five birdies, as did Alonso while 2021 PING Junior Solheim Cup winner Fouillet rolled in an eagle, four birdies and three bogeys.

They were joined by Spain’s Noemi Jimenez Martin who also produced a 69 (-3) with six birdies, one bogey and one double bogey.

A number of players are tied for eighth place on two-under after the first day including amateurs Mila Jurine, Elena Moosmann and Clara Moyano Reigosa.

Not all players were able to complete their rounds on the first day, so they will be completed tomorrow morning before the second round begins.