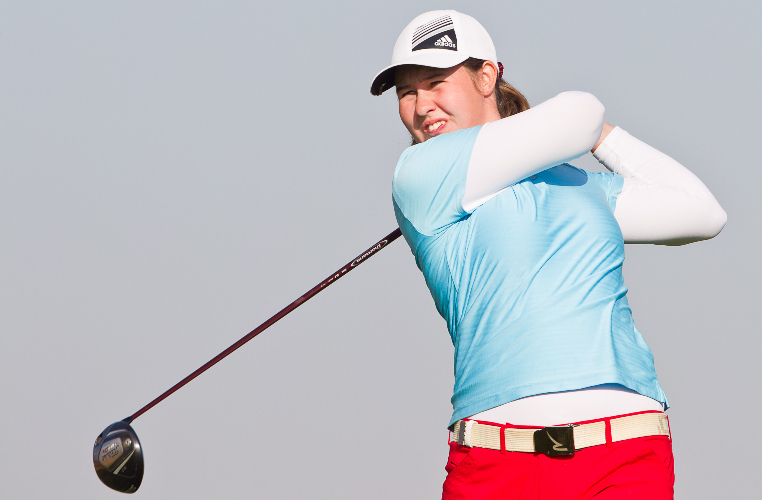 Nina Pegova leads the LETAS Order of Merit with three top-10 finishes in the first three events of the 2021 season.

The Russian number one was introduced to golf through her former tennis coach when she was just seven years old.

Pegova started practicing at a nine-hole golf club close to her home in Moscow, but she was not allowed to play on the golf course for five more years.

She said: “Her son started playing golf and she told my mom that it is a very nice sport and that her son was enjoying it. We thought it was a good sport for me for the summer months, so that is how I was introduced to golf when I was seven.”

“The golf course was very small and crowded with members, so I was not allowed to go and play on there. I was practicing in group lessons on the driving range, chipping and putting green during the summer months. And during winter, I was hitting balls into a net.”

After playing for five years and discovering her love of the game, at the age of 12 Pegova was finally allowed onto the course.

“Seeing all the nature around me, it was such a great experience for me, I absolutely loved it,” she added.

The 2019 Viaplay Ladies Finnish Open champion started her journey playing junior tournaments in the Moscow region and she travelled abroad for the first time ever for the European Young Masters in France at the age of thirteen.

“That was a huge experience for me, I absolutely loved the atmosphere and to see girls and boys from different countries. There, I decided that I love playing golf and would like to carry on and play in more tournaments abroad,” Pegova explained.

“Until the age of 18, I did not play many tournaments abroad. I would play one or two events like the European Young Masters of the European Girls’ Team Championship. Then I competed in the Hungarian Ladies’ Championship and also the World Amateur Championship in Turkey.”

“I will actually never forget that tournament, because I was around the top-10 after three rounds but then I got stung by a wasp on the last day. It was painful, they even called an ambulance for me, but they could not do much. We put some cold spray on it and then I carried on and finished in top-20 which was not bad considering my situation.”

At 18 years old, Pegova became the Russian amateur champion and went on to win the title for the next three years.

During that time, she started studying financial management at the Russian University of Economics in Moscow and turned professional in her third year.

She said: “In Russia, it is a big deal to win the championship. That was my first win and to win it four times in a row was a huge story.

“It was challenging to combine studies and playing golf, but I enjoyed every minute there. It was a nice atmosphere, friendly people and nice teachers who supported me, and my golf journey and I will always be grateful for that.”

The Russian golfer would mainly compete in her home country and attend some LETAS events, however she started competing full-time on LETAS after graduation.

“When I started traveling abroad more, I could feel more pressure in terms of organizing trips to different tournaments. I am happy to have my mum traveling with me, she helps me organize my life, my routines, so that I can focus on my game where I do all decisions by myself,” the 27-year-old said.

Pegova has had a great 2021 season on LETAS so far with two second place finishes and a T9 result. Although quarantine and other Covid-related restrictions were tough on many, the Russian sensation made the most of what she could work with.

“I tried to exercise and practice in my apartment, but there was not enough space,” she explained. “There is a small yard near my apartment, and it is all surrounded by skyscrapers. I bought a net and started hitting balls. But I was so much under pressure, because the yard is 10 meters above the ground and there are parking lots all around it. I could not miss a shot; my car was parked there as well!

“I was worried people would not understand, but everyone from the surrounding buildings supported me. They would stand on their balconies cheering me up. I was not able to buy a mat so after some time, the grass was disappearing because of the divots. So, I bought some seeds and tried to grow new grass and then this spring when I went outside, I saw lots of new grass that I planted last year!

“When I returned to the golf course, I just thought ‘wow, such a relief, there are no cars I could hit, no danger!’ When you think a water hazard is dangerous, it is nothing compared to the cars.”

Pegova is now getting ready for the LETAS season to resume after two weeks off as she looks forward to the ROMA ALPS LETAS Open.

She added: “I have been practicing on the golf course, working out in the gym, and also taking some time to relax and get ready mentally for the tournament next week.”