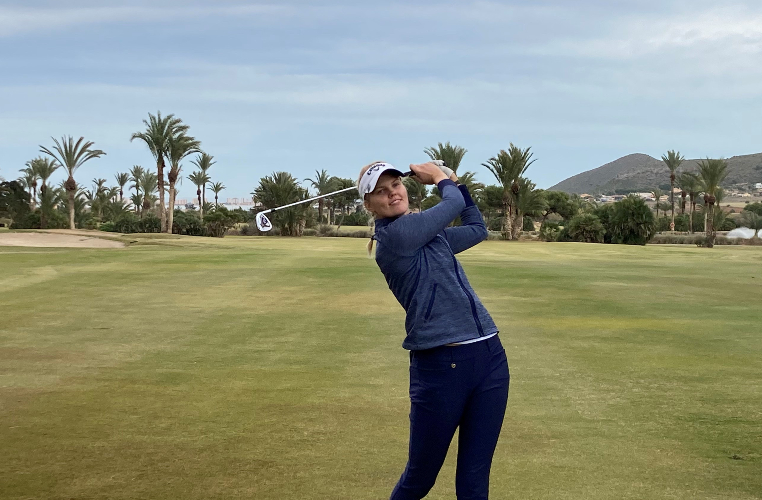 After an opening round of 67 (-4) on the North Course, Sweden’s Lisa Pettersson backed up that performance with a 70 (-3) on the South Course on day two at LET Q-School.

The 26-year-old held a one-shot lead overnight in Pre-Qualifying and began her second day at La Manga Club on the 10th tee.

And the Swede got off to a strong start with three birdies in her opening five holes before dropping a shot on the 15th to make the turn in 34 (-2).

Pettersson continued her fine form with two more birdies and another bogey in her last nine holes to finish with a total of seven-under-par and lead by three shots.

“The wind wasn’t as strong today as it was yesterday, so it definitely played a little easier than for those that played the South Course yesterday,” said Pettersson.

“I hit a lot of greens again, I think I only missed one and that was because my driver was a little bit off on that hole. I gave myself a lot of good chances on the first few holes. I rolled in a couple of birdies from about 2m so that was nice and got me going. I enjoyed it out there.”

Spanish duo Elena Hualde and Marta Sanz Barrio sit tied for second place on four-under-par after rounds of 69 and 68, respectively, on the North Course.

Auburn graduate Hualde had a bogey-free opening day before rolling in five birdies and three bogeys in her second round.

“Yesterday, was a hard day because it got really windy at the end of the round. I just stayed patient and tried to hit the greens,” said the Spaniard.

“I like the North Course better because it is shorter, and it makes it a bit easier having a short iron to the green and I prefer the greens there. I tried to qualify for the LPGA in the States but I’m taking the chance here this week and I hope that I can get in the top 20 at the Final Stage next week.”

There was a special moment for Sanz Barrio during her round as she carded her first ever hole-in-one on the par-3 eighth.

With three further birdies on her card and only one bogey, the 29-year-old was happy with her round and is feeling at home at La Manga.

“It has been a great couple of days. I am feeling very comfortable, playing very well and hitting the ball very well so I’m going with the flow,” she explained.

“My first ever hole-in-one! It was 165-yard shot, with the wind right to left. I hit a perfect 5-iron with a bit of a draw. It bounced about 10cm past the hole and then went in – I saw it go in which was great.”

Northern Ireland’s Olivia Mehaffey continued her consistent start with a round of 70 (-1) on the North Course to be in fourth place on three-under-par.

In fifth place is Norwegian Michelle Forsland, who is competing in her first LET Q-School, after she fired a round of 68 (-5) on the South Course.

“It was not as windy for us as yesterday, I tried to play simple, and it wasn’t too bad,” said Forsland, who attended Oklahoma State and East Carolina Universities. “I made a two long putts in a row which was fun for me. You’ve got to roll the putts as well as you can out there.

“It is my first LET Q-School, I’m a bit nervous but I’m trying to handle it as best as I can. It is a good experience overall and I’m just trying to stay calm because there is a lot of golf ahead still.”

Nine players sit on level par at the halfway point of Pre-Qualifying and with the top 75 and ties making it through, there is still plenty to play for over the next 36 holes.