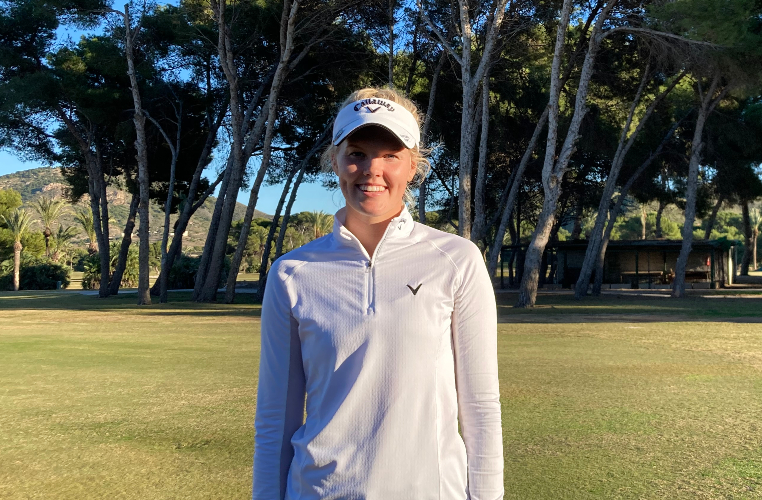 Sweden’s Lisa Pettersson is still in front at La Manga Club and she holds a three-shot lead with one round left at Pre-Qualifying.

The 26-year-old has had a consistent week in Spain and after rounds of 67 and 70 on the first two days, Pettersson carded a 69 (-2) in the third round to be at the top of the leaderboard on nine-under-par.

It was a slower start for the Swede who made two bogeys and a birdie on her front nine on the North Course, but she soon kicked into gear rolling in four birdies and one bogey on her back nine to sign for a round of two-under.

“I struggled in the beginning a little bit. I felt I was almost off on everything – my driver, my irons and my putting,” said Pettersson. “I really got it together on the last five or six holes, pulled off some good birdie and finished strong. It was a good day.

“I am trying not to get ahead of myself in terms of next week and just stay patient. I’m excited for next week and hope I can continue with this but golf you never know what the day is going to be so we will see.”

Three shots behind Pettersson is Northern Ireland’s Olivia Mehaffey, who produced a round of 70 (-3) on the South Course.

The 24-year-old got off to a hot start with two birdies and an eagle on her front nine, she rolled in another birdie on the 13th before making a double bogey on the 15th to finish three-under for the day and a total of six-under-par.

“I have been hitting a lot of greens the past few days and I finally putted a little bit better today and got off to a fast start. I struggled a little bit coming in, but I managed to keep it together,” said Mehaffey.

“It has been windy the past three days which reminds me of home, and it was nice to have the sun on our backs. I’m enjoying playing both courses and having a good time with my caddie, so I’m trying to keep it light out there.”

German amateur Sophie Witt was one of two players to card a 66 (-5) on the North Course and the 19-year-old jumped up the leaderboard to third place on five-under-par.

Witt only dropped one shot all day, rolling in six birdies on her way to a five-under round and the Dusseldorf native was pleased with her efforts.

“It was pretty fun. I was in the flow out there. On the last two holes, I had two lip-outs for birdie.  I played good golf on every fairway and green,” she said.

“It is my first LET Q-School and it has been a good week. I’ve had great groups to play with and my mum is caddying for me – it is the first tournament in a year that she has been here with me because she couldn’t travel due to Covid-19.”

Spain’s Camilla Hedberg carded a round of 70 (-3) on the South Course to move up to fourth place on four-under-par.

Despite making a double bogey on the 12th, the Spaniard was impressed with her mindset and how she played at La Manga Club.

“I played very solid, all the way from the start. I missed one shot and it was a little bit too expensive because I had a triple bogey on 12,” said Hedberg.

“Other than that, I don’t think I made any more mistakes. I played very solid and hit a lot of fairways and greens. I putted pretty well too. I stayed out of trouble pretty much the whole day apart from that hole and I kept a good attitude the whole day long.”

Three players are in a share of fifth place including Nigeria’s Georgia Iziembe Oboh, who shot a round of 70 (-3).

“It is obviously a little bit windy, and it is warmer today than the first couple of days. But I came early and practiced quite a bit in the wind. It is nothing I wasn’t accustomed to; it was about making the right shots at the right time,” said Oboh.

“I spent a few weeks really trying to improve my skill and technique and now I’m applying it out on the course. I’m happy with where my game is at, at this point and I can only see bright things.”

Oboh sits on three-under-par for Pre-Qualifying alongside Spanish duo Paz Marfa Sans and Marta Sanz Barrio, while Spain’s Ana Pelaez and Elena Hualde sit one shot further back on two-under-par.

Scotland’s Jane Turner matched Witt in producing a round of 66 (-5) on the North Course and the Scotswoman, who sits tenth, is enjoying her week.

“I opened with a birdie which is actually what I have done in every single round but today, I managed to carry it through with more birdies on the front nine,” she explained. “I putted really well, holed some really good putts and it was a really solid round with no real errors. I made one bogey today and just kept everything in control.

“I have actually only been here twice before this. Once was in my last year as a junior and the other one was in one of my last years in the Scottish team for a European Team Championship. In both of those, I won the junior tournament and got a bronze medal at the Team. There are good vibes here – hopefully it carries through. I have got to take it as it comes.”

The top 75 and ties from Pre-Qualifying will progress through to the Final Stage and with 18 holes left to play, the cut currently stands at +10.