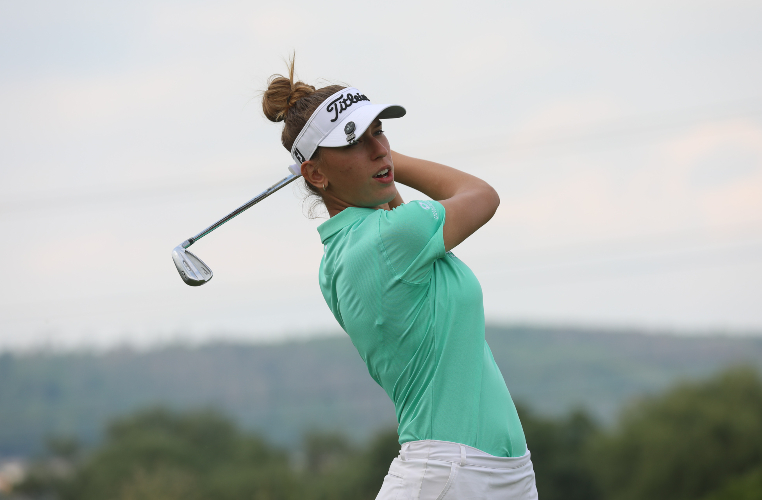 Only at 16 years old, Germany’s Chiara Noja leads the way at -11 heading into the final round of the Amundi Czech Ladies Challenge.

The Dubai-based sensation fired a round of four-under 68 today and sits atop of the leaderboard with ten shots to her advantage.

“I played well again, just a few drop shots here and there that weren’t necessarily needed but we’re doing good. Definitely looking forward to tomorrow,” commented the leader whose front nine was flawless with four birdies.

“I put myself in contention on pretty much every green on that nine, I took the opportunities and scored.”

The leader started her second round on the afternoon side of the draw where players battled with rainy conditions on the back nine.

“I refused to put a rain jacket on because I didn’t warm up in it, but it went away in about four holes, so it wasn’t too bad,” said the young professional who has experienced sleeping on the lead in the past.

“It’s always a little nerve-wracking sleeping on the lead but today I said that we’re gonna make it and be a little comfortable heading into the final round,” admitted the rising star who is still on the hunt for her first LETAS title.

After shooting the round of the day 67 (-5), defending champion Sara Kouskova sits in solo second spot at -1 total. The local star who turned professional only a few days ago is cherishing the low round at her home course.

“I had a much better round today. I hit most of the fairways which gave me great positions for approach shots.

“I am excited to play in the final group tomorrow. I wasn’t sure if that would happen after yesterday’s opening round, but I am very proud of how I pulled through today and it will feel great to have that final group experience after one year again.”

Tied for third at two-over after day two is a local amateur duo Karolina Stara (+2) and Patricie Mackova (-1).