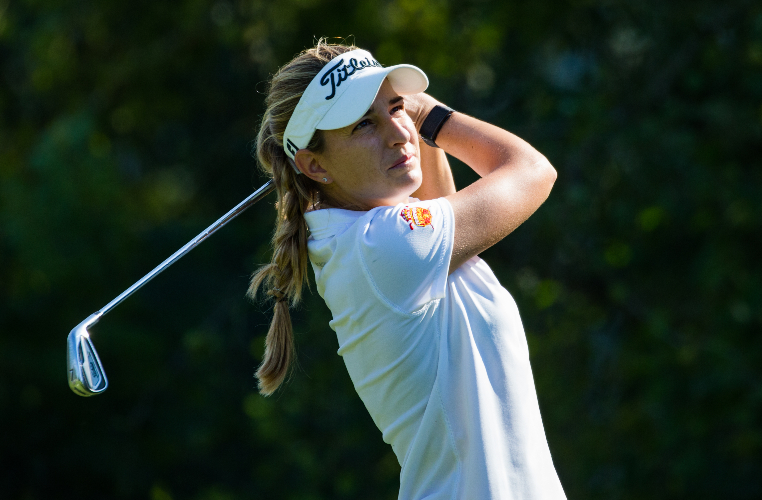 Home favourite Luna Sobron fired a sensational round of 64 (-8) to grab the first round lead at the Santander Golf Tour Lerma by one stroke From French amateur Agathe Laisne, who continued to impress on the professional circuit with a round of 65 (-7).

Sobron, who is a two-time LETAS winner and plays most of her golf on the LET, enjoyed one of the most stress-free rounds of her life, hitting every single green in regulation en-route to a clinical round of 64.

Starting from the 1st tee, Sobron made hay while the sun shined in Burgos, sinking a 9 meter putt on the second hole for birdie before making further gains at Nos. 3,4,6 and 8 to turn in 31 shots.

Further birdies on Nos. 11,13 and 15, which included an array of length putts from three to five meters, to see her home in 33 shots and hold the clubhouse lead from 21-year-old French amateur Laisne.

“I made a lot of good putts today and I am happy with my round. The putt on the second gave me a lot of confidence and since I have been practicing my putting most this year at home and in lockdown, I was able to make a few more.”

Pushing her own electric trolley this week around the picturesque par-72 layout, Sobron’s round was made even more impressive by that fact that she only managed one birdie from the four reachable par fives and a closing par at the risk/reward driveable par four 18th.

In a round which could have been even lower, Sobron added, “I love the style of courses in Spain, the trees and even the type of grass, I feel at home and that showed today. It would be a brilliant to win at home, I love to play in Spain and if I won here it really would be a case of the hard work paying off as I’ve worked really hard on my game this year.”

Trailing her by stroke in second place is Agathe Laisne, who continued to demonstrate why she is one of the highest ranked amateurs in the world with a sizzling round of 65. The 21-year-old who in making only her second LETAS appearance, having won the Lavaux Ladies Open in her first start, finished with a flashy birdie, eagle finish which included driving the green on the iconic closing hole, the par four 18th.

French compatriot Anaelle Carnet sits in solo third place after a round of 66 (-6) while six players fired impressive rounds of 67 (-5) to lie in T4.

Amongst the group at five-under-par is Finland’s Tiia Koivisto, who currently sits atop the LETAS Order of Merit, as she continues her aim of locking up the all-important first prize of a full LET card for 2021, which is awarded to the season-long Order of Merit winner.

On a day of low scoring, as many as 44 of the 83-player field signed for a score of par or better.