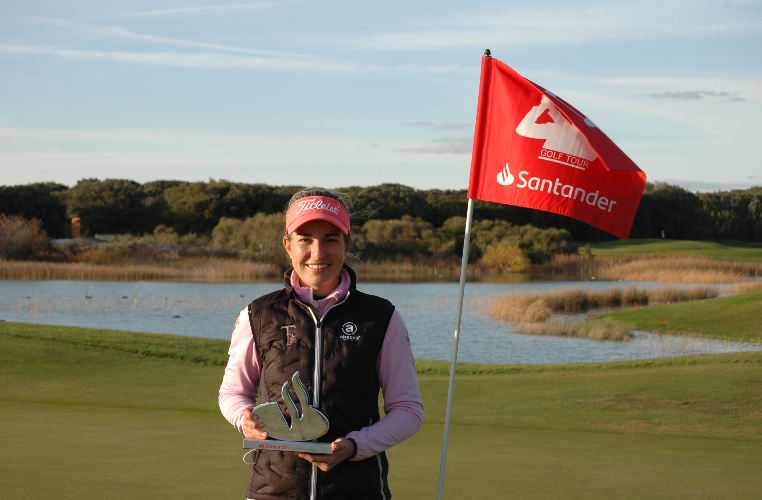 Spanish star Luna Sobron Galmes survived a thrilling eight-hole playoff at Lerma Golf to capture the 2020 Santander Golf Tour Lerma after a final round of 68 (-4) left her tied at the top at 12-under-par alongside compatriot Mireia Prat and overnight leader Anaelle Carnet.

Sobron said at the start of the week just how comfortable she feels playing golf at home and vindicated her decision to compete for the first time this year on the LETAS, making birdies galore on the iconic 257 yard 18th hole during the enthralling playoff which saw all three players produce a series of stunning shots and clutch putts.

Sobron’s winning putt from 4ft for a birdie on the eighth playoff hole was remarkably her seventh birdie of the contest and courtesy of the win, Sobron collects €5,600 and her third LETAS career-trophy.

“I’m can’t believe what just happened, I am delighted to win the tournament and I love playing at home in Spain. I guess hard work does pay off. I have been working a lot on my putting the last two weeks and that gave me extra confidence today and especially under the pressure of the playoff.”

Starting the day two shots adrift of Carnet, Sobron made an early move with four birdies on the front nine to turn in 33 strokes, only to be matched by Carnet in the final group to keep her nose infront.

Unrelenting, Carnet led for the duration of the round and looked set to capture her first LETAS victory until a closing bogey on the 18th hole and a pair of birdies from Prat and Sobron derailed her chances.

With nothing to separate the trio in regulation, they headed back down the renowned par four 18th hole for a three-hole aggregate playoff – only for all three players to make birdie on each occasion to tie before heading back to the tee for sudden death.

Another pair of birdies for Sobron and Carnet saw Prat eliminated from the stand-off before the pair engaged in further battle, halving the 17th in par before both stepping back on the birdie-train with gains on the 18th and 17th hole.

Standing on the 18th tee for the 5th time in the play-off and 6th time for the day, Sobron finally took the initiative, driving the green to 40ft while Carnet found the bunker. Unable to get up-and-down from the sand, Sobron rolled up to 4ft before calmy tapping in to collect the first-place prize.

“I love to play under pressure but that was crazy. Anaelle and Mireia were both amazing today and it is shame that someone had to lose. By the eighth hole I could feel that my knees were getting a bit tired and I was hungry so I was definitely relieved to be able to finish it there.”

Finland’s Tiia Koivisto extended her lead atop the Order of Merit with a T5 finish and looks set to benefit from the all-important first place prize of a full LET card, but with as many as the top seven players still in with a chance with victory next week, it’s all the play for the season finale, the Santander Golf Tour Lauro.