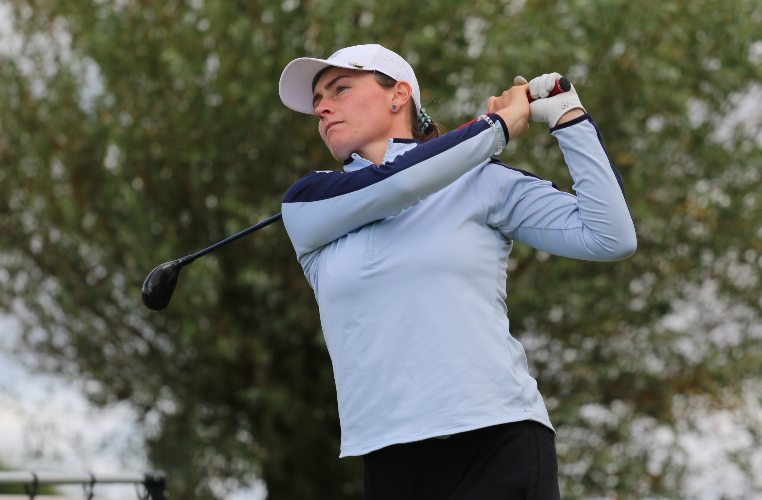 Sweden’s Maja Stark and England’s Lily May Humphreys share the top spot at the PGA Championship by Trelleborgs Kommun after firing opening rounds of 67 (-4) in Tegelberga.

Stark, who recently turned professional, began her round with a bogey on the par-three third but got on a roll after that.

The Swede, who ended her amateur career ranked fifth on the World Amateur Golf Rankings, carded a birdie on the next hole and rolled in three in a row on holes 7 through 9.

Stark made the turn in 35 and added one further birdie on the par-four 16th to open the tournament with 67.

“It feels great to be leading after day one and I’m happy with my start, but there is still a lot of golf to play. I’ve been playing on this golf course since I was ten years old so it’s very familiar and in a great condition. I played steady, had a lot of birdies even though I started the round with three lip-outs in a row,” said Stark.

“The strategy for me here is to be less aggressive than I usually am. The greens are pretty firm and roll fast, so maybe not go for every pin, every birdie, and just have patience and the birdies will come,” added the co-leader.

Humphreys continued her recent LETAS form to share the lead alongside Stark, making five birdies and one bogey in her round of 67.

The English star, who currently leads the LETAS Rookie of the Year rankings, started her season on Tour with a win in Belgium and has added three top-10 finishes including two second places in the last two events in Sweden.

“I feel like you need to have good short game around this course since the greens are narrow and slopey, and you also need good approach shots. My three birdies in a row were a nice way to really settle me into the round with a tougher back nine coming up. I just holed two good putts on 6 and 8, then hit it close on 7,” said Humphreys.

“I’m a very competitive person so it’s not too difficult to keep focused on trying to play well but I’m just doing what I need to with practice and then don’t overdo it.”

Four players are tied for third after day one with Australia’s Amy Walsh sitting alongside Swedish trio Josefine Nyqvist, Meja Örtengren and Elin Pudas Remler – after they all carded rounds of 69 (-2).

The highlight of the day came for home player Emelie Borggren, who made a hole-in-one on the par-three 13th.