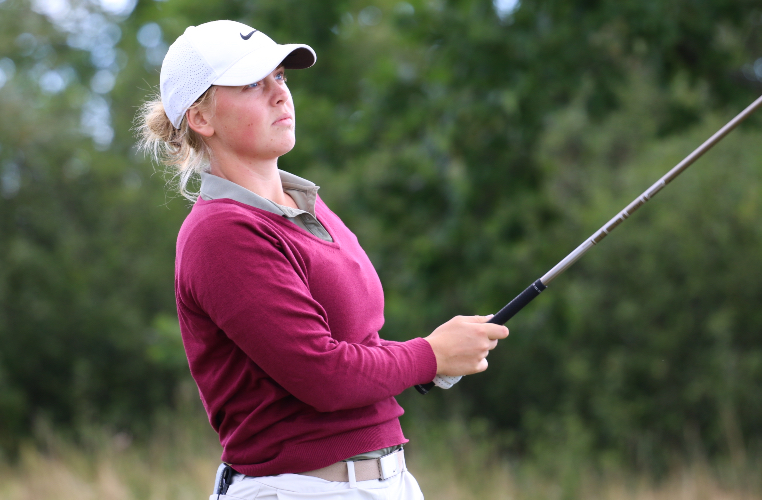 Sweden’s Maja Stark carded a round of 70 (-1) to lead the way heading into the final round of the PGA Championship by Trelleborgs Kommun in Tegelberga.

The Swede, who recently turned professional, had a fantastic start to her second round with four birdies on holes 4 through 8.

Stark dropped three shots on the back nine but remained at the top of the leaderboard on five-under-par for the tournament.

“My strategy was pretty much the same as yesterday, which is playing defensive but with an aggressive mindset and swing. The wind was coming from a different direction than it usually is on this golf course so that was interesting,” said the leader.

“I had all of my birdies on the front nine which was great, but I’m not satisfied with my finish. I am very excited about tomorrow and hopefully I’ll make some putts. It feels great to be still leading, I’m a bit nervous but I think that’s a good feeling and hopefully it makes me more focused when trying to get that trophy.”

Norwegian amateur Mia Sandtorv Lussand sits one shot back in her second professional event after firing the second-best round of the day – a 68.

Lussand carded seven birdies and four bogeys on her way to shoot three-under-par. She said: “My game feels good, I feel it is possible to go low. My driver and long irons are strong which gives me some good birdie opportunities. I holed some good putts today, but I could have avoided the two three-putts I had as well.

“I am very excited to play in a professional event, and to test myself against high-level players here. And of course, I’m even more excited when I score, too.”

Three players are tied for third on three-under-par, as Finland’s Emilia Tukiainen joined Lussand with firing today’s second lowest round of 68.

England’s Lily May Humphreys carded one-over 72 today while Sweden’s Josefine Nyqvist shot one-under 70 with a birdie on every other hole on the front nine.

In outright sixth place on two-under-par sits the champion from Västerås, Korean Nayeon Eum who carded two rounds of 70 (-1).

Four players sit in T10 including England’s Thalia Martin firing the best round of the day, 67, to be even par.