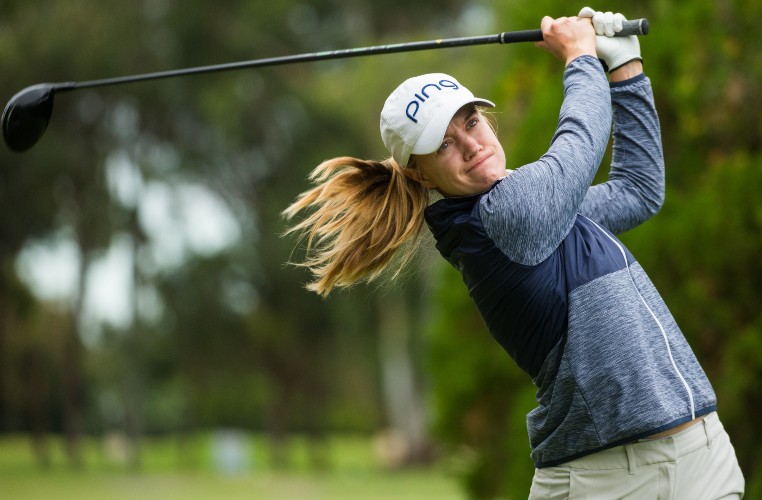 Three players share the lead after day one of the Flumserberg Ladies Open, with Michelle Forsland, Gemma Clews and Lauren Holmey all shooting opening rounds of 68 (-4) in Switzerland.

The trio sit one shot ahead of a further four players on -3 after the first day of action, as they made the most of the conditions at GAMS-Werdenberg Golf Club.

Norwegian Forsland shone in the afternoon with five birdies on her card, with her only dropped shot of the day coming on the third, albeit with a birdie either side.

Further birdies on nine, eleven and 16 put her into a commanding position in the early stages of the competition, and the 25-year-old was pleased with her day’s efforts.

“It’s a tricky course, especially with the high rough – you can’t find it if you miss the fairway by a little bit – so I managed to keep it in play which was very important today,” she said.

“I kept it simple, kept it in play and then hit a lot of greens so it was a good day.

“I took advantage of the par-fives, I had three one-metre putts on them today, and I just tried to hit the greens so I could putt to the pins.

“I guess I was a bit nervous off a few tee boxes, but I adjusted and kept it in play. Tomorrow I’ll do the same and attack the pins I can, we’ll see how it goes and hopefully I make some putts.”

18-year-old Holmey is competing in her first LETAS event of 2022, and wasted no time in getting her season up and running with five birdies in her first tournament round of the season.

After dropping a shot on the 11th on her second hole of the day, Holmey made a bounce back birdie on 12 before picking up another shot on 17 to make the turn in 35.

Birdies on holes two, three and five put the Dutch star into a commanding position as she made her way home, and put her at the top of the tree heading into day two.

Clews had a topsy-turvy start to the day at GAMS-Werdenberg Golf Club, with a birdie on the first followed by a bogey on the second, before a double on three saw her two shots over-par in the early stages.

But the Manchester-born star fought back from that early setback with a birdie on the seventh, before storming home in 31 (-5) to put herself in a share of the lead heading into Friday.

The 27-year-old picked up a shot on the tenth to bring herself back to level-par, before four birdies in her last six holes saw her rise up the leaderboard in the latter stages of the day.

Zhen Bontan and Anna Magnusson are among the quartet one shot behind heading into Friday’s action, with the duo firing rounds of 69 (-3) as they made the most of the early morning conditions.

Magnusson picked up three shots on the front nine, with birdies on holes two, six and nine, while a bogey on 13 was cancelled out by a brilliant birdie on the last.

Bontan also finished her day with aplomb after a birdie-bogey start to the day, with the 24-year-old picking up shots on the ninth and 16th, before finishing the day with a birdie on 18.

Englishwoman Sharna Dutrieux also shot 70, and sits alongside Nikki Hofstede of the Netherlands, as well as French amateur Emma Falcher.