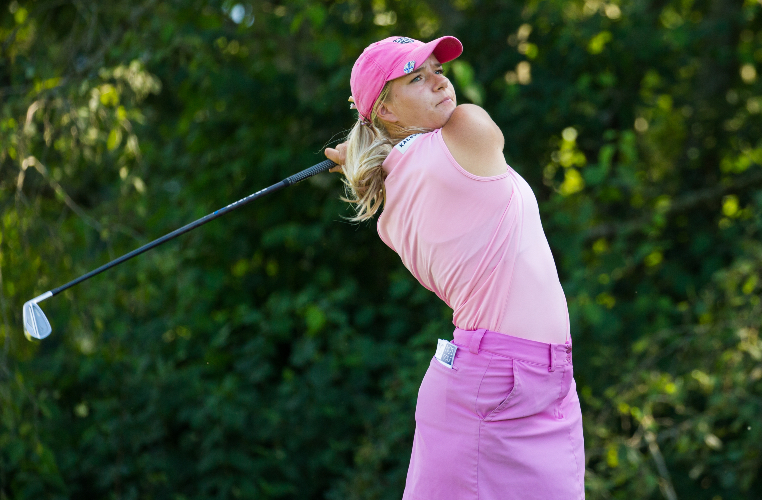 Three players are level at the top of the leaderboard after day one of the PGA Championship Trelleborg in Sweden, with the leading trio firing an opening round of 66 (-5) at the Tegelberga Golf Club.

Finland’s Karina Kukkonen, Zhen Bontan of the Netherlands and home favourite Moa Folke all share top spot heading into the second day, with three impressive rounds seeing them sit three shots ahead of the chasing pack.

Kukkonen carded three birdies in a row early in her round on holes 3 to 5, and made the turn at -4 after picking up another shot on the eighth. She added two more birdies and a bogey on the back nine to give herself a share of the lead.

“I had a lot of eagle putts and short birdie putts today and I knew that I wouldn’t make all of them, but I gave myself so many chances that I knew I will shoot under par. It was a good day today,” said the 26-year-old who has had a solid start to the 2022 LETAS season.

“I changed coaches in between seasons and didn’t play tournaments until Terre Blanche. I was hitting 500-600 balls every day to work on technique.

“It was getting tough at times but it definitely paid off and I am happy with my game at the moment,” added the Finnish player.

Bontan also had a good start on the front nine and made the turn at four-under 34, and the Dutch star was delighted with her day’s play and her performance on the greens.

“You have to take the chances you get on the front nine because the back gets more difficult. Luckily my putter was on fire today and I really liked how I played,” commented the 24-year-old.

Joining the duo at the top of the leaderboard is Folke of Sweden. The local player – who is playing in her first LETAS event since 2020 – birdied holes four, six and seven to be three-under after the first nine, before carding three consecutive birdies at the beginning of the back nine.

The trio jumped sit three strokes ahead of the rest of the field, with four players locked on -2 after a first round 69, including Swedish amateur and PING Junior Solheim Cup star Meja Ortengren and compatriot Isabell Ekstrom.