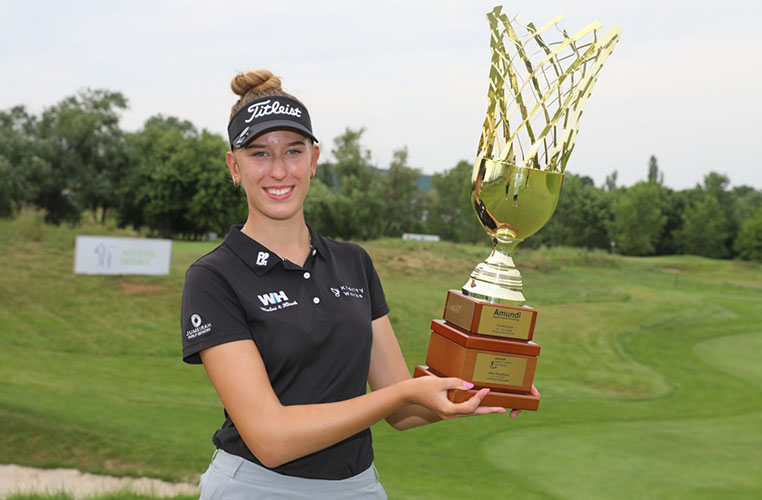 Chiara Noja carded a final round of one-under 71 at the Amundi Czech Ladies Challenge to secure her maiden win as a professional on the LET Access Series.

The rookie superstar finished the tournament on a total score of 13-under-par and won by nine strokes at the Prague City Golf Club.

“I feel very relieved. I was super stressed today, but I stayed calm and collected and on the 18th hole, I thought, ‘Okay, I actually won and that was a big moment for me’,” commented the 16-year-old.

“The first round was definitely a momentum kind of thing. But the whole week I kept telling myself that when I go into that final round, I want to be many shots ahead because I lost in a play-off in Terre Blanche leading by two before the final round.

“It didn’t turn out the way I wanted there, so this time I wanted to nail it and go all out in Prague. I think that was the biggest motivator,” admitted the champion.

“I am super thankful for the process and the journey and I’m excited about sitting on the top of the Order of Merit as well. But I know it is a long season and we will see what it ends up looking like,” said Noja.

Local star Sara Kouskova finished in solo second as she tried to retain the trophy with a great performance in the last two rounds. The fellow rookie signed for a final round of two-under 70 to become the runner-up and best Czech player in the field.

“I am happy with my game and the overall finish in my first event as a professional. The plan for today was to put on a show and perhaps even some pressure but Chiara had an outstanding performance in every round, and she is a great winner and I congratulate her,” shared last year’s champion.

Katharina Muehlbauer from Austria fired the lowest round of the day with a three-under 69 that moved her up the leaderboard to take third place at one-under-par in total.

Tara Mactaggart from Scotland and Yvie Chaucheprat of France rounded out the top-10 as both tied for ninth place.

With her win, Noja moved to the top of the LETAS Order of Merit with 875.00 points after her third LETAS start of the season. Muehlbauer, who fired the lowest round of the day, kicked ahead by six spots to take fourth place on the rankings with 495.50 points. Runner-up Kouskova sits in tenth with 320.00 points.

The LET Access Series now moves to France for the Montauban Ladies Open.